Cutting it (insulation that is)

The two bundles of insulation I got at McCoy's turned out to be too short to go from the bottom plate to the top one between the studs. I didn't want to wait until the supply run next month to return it and get the right length so that meant cutting a bunch of short pieces to fill in. 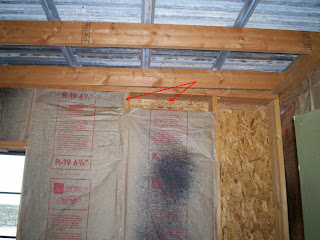 I wasn't real sure how I was going to pull that off until I remembered my early HVAC career as an installer before switching to service. I learned from an old hand how to cut the insulation we used to wrap the duct work and that was to use a sharp butcher knife to cut it. It worked the same with the R19 pink insulation. 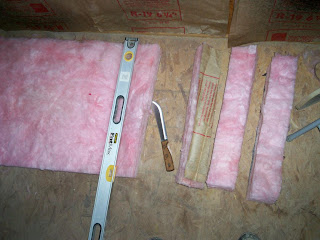 I used the level as a straight edge, stepped on it to mash down the insulation and made several passes through the insulation up next to the level. The first swipe cut the insulation and several more cut the paper backing. Don't know how other people cut insulation, but if you use a different method then you might try this one. Works great. I have to hand it to the insulation makers! They have come a long way since back then. Back then the stuff would eat you alive just being around it, but this stuff wasn't bad at all.

I also drilled a couple of small holes in the corrugated metal on the roof today. I put them on the back side where the drain off is and then wired the extension ladder to the metal to make sure it didn't blow down stranding me on top. I patched the two areas that were leaking and hopefully the building is totally dried in now. Will need another rain to find out for sure though. 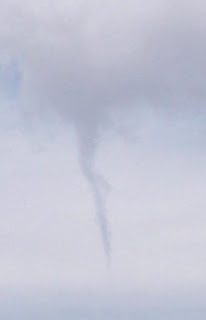 The above picture was taken some time back just before a storm. Not sure if its a funnel cloud or not, but sure looks like one. It went back up in the cloud before going any further down.

BTW I borrowed Dave Secor's old camera to take the pictures of the insulation and the others were on the memory card before my camera potted out.