I think its safe to say the chili cook off is over. This morning 118 is as busy as most super highways with all the people headed north from the cook off. I hear the DPS troopers have been even worse this time and evidently harassment is foremost on their minds. They stopped my neighbor's wife yesterday when she was coming home from work at the BBMI. Worst than that she wasn't doing anything wrong, the car was totally legal and she is a preacher's wife. They made her stand between the cars while they searched her car. Now I ask... Where is the Probable Cause here? I'm not a big fan of the ACLU, but think they might actually be able to do some good in this case. So far I've seen NO troopers headed North just one more headed South. I figure since a lot of people hold over a few days to give the heat time to leave the area then the heat has decided to stick around to? From the information I got yesterday the troopers are headquartering at the Baptist Church in Study Butte? One woman and man said that was where most of the troopers were when they went by there. 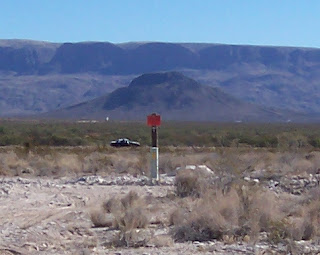 State trooper headed south this morning. Night before last I saw one pull someone over on 118 out here. 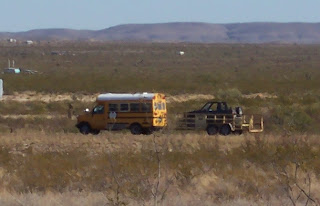 Sort of reminds me of the Hippie days.

The red lines point out all of the vehicles headed North in that one picture
Its been like that all morning with drove after drove of people heading out.
===
Posted by tffnguy at 11:26 AM