The way we were

The Dungeon and I that is.

Its been a while since I updated this blog and I don't have much to update it with and no pictures at this time. I will post the picture of Allen and Ok Hwa Hare that I took when they stopped by on their way back to the DFW metroplex. Was good to see them again.

As far as the dungeon goes its real close to being back like it was when it was dropped off here. (Other than being full of most of my remaining worldly possessions.) The only thing remaining is the front I built for it and as soon as I have a need to that it will also be disassembled. I've started building on the new storage building with the material taken from the inside. Its starting to look like I may have to keep the dungeon for another month though because I will be just a little shy on material to finish it. Its also turned in to one of those one step forward and two steps back deals. JustMe stopped by this afternoon and renewed an offer of some used siding she has though so I may still be able to let the dungeon go to some other needy soul at the end of the month. I wish the next renter good luck with what ever they use it for. 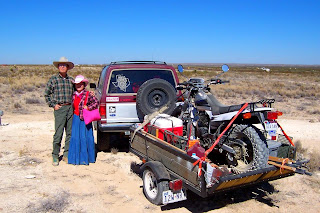 Picture is of Allen and Ok Hwa just before they pulled out to go home. Pretty nice rig they have and I would love to have a little Broncho like the one he has. Maybe one of these days.
Posted by tffnguy at 4:41 PM