First picture is of the Backscatter radar between here and Alpine. Frann's pictures on her blog were taken on the way in to Alpine and this one was taken on the way back. The light on the top was flashing on the return trip so I assume that meant it was in operation? 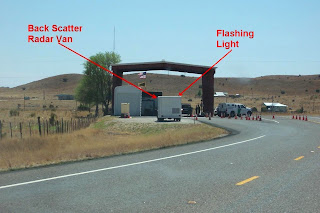 Been working on the new hut for the fridge. No thanks to McCoy's in Alpine because they didn't have much I could use. They were out of 1/4 and 3/8th inch OSB board so I guess I'll wind up doing like I did on the shower and use blueboard foam until I can get OSB. I was planning to plaster it like I did the battery hut, but it looks like that will be a while off. For now the fridge is just temporarily sitting on a pallet with some steel siding behind it to block the evening sun. I did have the thermal board on top to help, but had to use that for the flooring in the hut. 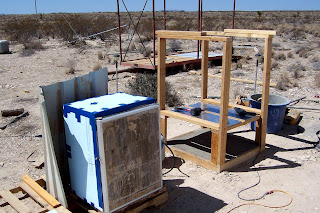 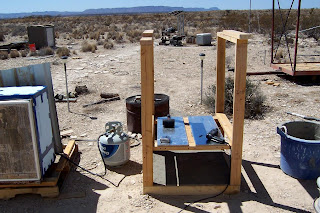 Unfortunately I ran out of long screws so what you see is as far as I got. I'll have to go south in the morning to get the information the Sheriff's deputy said I need and he will be here Tuesday to fill out the report so I can have my credit reports frozen for seven years rather than the 90 days it is now. Ill get more screws there and see what they have at that small hardware store while I'm down there. I had called the sheriff's department and a deputy was supposed to call me back, but the phone never rang so I assumed they just didn't want to bother with it. Turns out that was NOT the case because they tried several times. What the problem was is that the old phone with answering machine I got at the thrift store in Alpine doesn't ring unless its plugged in to 110 volts. I'd been unplugging it at night and one morning I forgot to plug it back in and it stayed that way for over a week. I could call out so assumed no one had called. CRS is really grand! However, that is the first phone like that I ever had that wouldn't still ring if unplugged! I cornered one of the deputies in Study Butte last week and asked him and he said he would send someone here after I told him where I lived, but it was yesterday before I ever saw one. He saw the falcon at the Grub Shack and stopped there to talk to me. He told me what all he needed and I told him I'd have to get that tomorrow so he said he would drop by here Tuesday. It will be nice to get that behind me.
Posted by tffnguy at 4:04 PM