Tourist / ID Theft / Out of supplies.

I'm going to have to make a good effort to get the falcon running today! I'm about out of ice and the legion is to. The GS was low also the last time I was there so unless they've got another load since then a trip there wouldn't help. I'm also low on other supplies and in BAD need of a shower so... I sure need to get the falcon up to the trip south!

From what I hear from the neighbor SB and BBMI is bustling with tourists so I hope I'll be able to get a shower IF I make it in.

As for the ID theft I called the sheriff's office yesterday to try and get them to fill out a report on the ID Theft and the person on the phone said the deputy who would do that had stepped out and would call me back shortly. I made that call yesterday morning and the return call never came. I can't hang out in here all day waiting so will have to try to get south and then call them again tomorrow.

The picture below I took a couple of evenings ago and it was a couple of tourist on bicycles with trailers behind them. I can't imagine making it up the mountainous part of 118 on a bike without a trailer much less with one. The trailers appeared to be pretty big to. All I can say is those two people must really be tough! 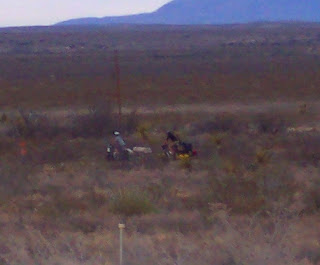 Below is another sunset from day before yesterday when it was mostly cloudy. 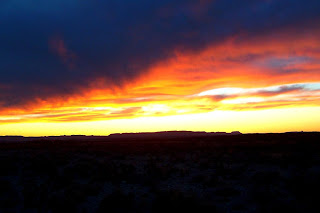