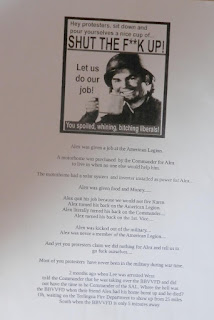 The flier above was posted on the American Legion Post 653's (Terlingua, Texas) bulletin board. This was a month after the protest over the way the legion handled Alex and for that matter other veterans needs. I say a month after, but I didn't see it until the flier was handed to me. That protest was after Alex' death.

I feel it my duty to get the truth out about this BS! First off NO I didn't break the law by going there because I am banned from there over trumped up BULLSHIT charges even though there were plenty of witnesses to dispute those claims. Alex was banned from there a couple of days later. The fliers were handed to me by a woman who is still able to go there.

(1) Yes Alex was given a job there. (First by me because the woman he bought the land from emailed me asking me to watch out for him because he was having a rough time. I gave him a job as bartender.)

(2) The motor home purchased by the commander was NOT for Alex it was purchased because the commander got a good deal on it and planned to use it for his own use later. Alex was charged RENT on it. Alex got help from quiet a few other people including me.

Alex WORKED for his MONEY both as a bar tender and working with other people on his off time.

As for given food? Guess what folks everyone else was to after it was donated to the public at the legion as a food bank and not by the legion. (exception would be food purchased by the legion for pot luck suppers (and a lot of times by the bartenders.) About all of them did that INCLUDING Alex (out of their own pockets.)

Thanks Chuck and Cathy for the groceries that supported this area along with Mike at the Family Crisis Center. And of course the Bar Tenders, Members and customers.

OH! BTW Alex was not booted out of the army. He was HONORABLY discharged, but the AHs at the legion keep wanting to defame him.
Posted by tffnguy at 3:22 PM