All in Good Time! 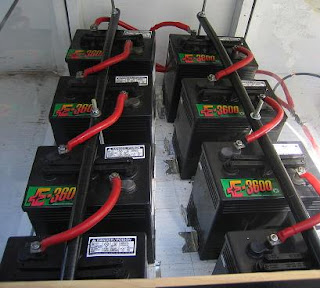 I've made a deal for more than enough batteries to put me over the 800 AH requirements to get DSL and a phone to the property. My wind generator should take care of the rest of that requirements. My main problem now will be digging deep enough for the swivel for the wind generator pole to go on. Out of five holes I've dug about a foot deep was the deepest and I'd like to go down at least 14 inches. The others were only around 4 to 5 inches before hitting solid rock. Looks like I'll be investing in a hammer drill and a long masonry bit before I go any deeper than that and it will take one for the wind genny pole and three more for the guy wires to support the pole. Of course I will have to have a generator backup for when the wind doesn't blow enough to keep the batteries up. All in good time I guess?

ADDITION
I made a a very poorly planned trip to the land yesterday to try digging more holes in different places to see about putting up the wind generator. I didn't take any drinking water or anything else to drink so I was getting thirsty by the time I left there. Especially after pounding on the rock for a while with a pick. I also forgot the GPS and camera to document my findings on measurements. I did have my 25 foot tape with me (which would only come out to 24' 6" including the 3" of the case.) I also forgot to take a pen, paper and calculator so didn't have anything to figure on and I'm lousy at doing math in my head now days. I didn't know my cell phone had a built in calculator until I was messing with it last night so now at least I'll have one when I go back today. I'll also make sure to take the GPS, camera, pen and paper.

While there I walked down to the road north of the land to measure from there back to the end of the property. I looked further down the road toward the American Legion and noticed where someone had piled up rocks around a piece of PVC so assumed someone was trying to figure out the boundaries for their land. I walked down to it and measured from it to the edge of the road north, but evidently it is in the wrong place because after figuring it up that came out to 464 feet which should only be 330 feet from it to the road's edge. My other measurements were from the other side of the road south and to a point south of  the driveway on my land. I marked that so with my figures there should be another 181.5 feet to the south corner (IF the boundaries are actually from the road's edge). When I go back out there later today I plan to finish the measurement to find where the actual corner would be if the measurements are from the road's edges. I'll mark that with the GPS and see where it comes out in comparison with the safe corner Just Me gave me and the original coordinates I got from CCL when I bought it. I'll update this again later with what I find.
Posted by tffnguy at 5:50 PM