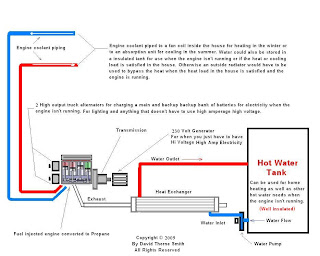 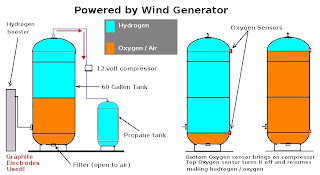 This is basically just filler for now. I may have some new news tomorrow and if so I'll Do another subject. The two pictures are projects I was thinking about long before I left Plano and one of them I'd still be interested in doing. Not the storage of hydrogen though. On that one I'd thought I could use automotive HO sensors as relays, but unfortunately they have to be very hot to work so I'd have to come up with something else. At the time I did that drawing I did have a hydrogen booster hooked up to my wind generator just for the heck of it. About all that did was turn a 2 liter coke bottle in to a rocket and nearly fried my hand. Hydrogen doesn't require much pressure to be liquefied, but it takes a VERY cold temperature. Just so happens that liquid nitrogen is plenty cold enough and cheap to so this could happen pretty easy.


The other idea that I do want to try can be read below.

The gasoline engine is not very efficient for several reasons, but the main two are because 1/3 of the energy produced by them is given off as heat and lost through the radiator. The second is 1/3 rd is heat lost through the exhaust. Both of those account for a 2/3rd loss of efficiency. The power that is actually made by a gasoline engine only accounts for 1/3 from the gasoline burned. Note the picture where I've shown where the other power could be reclaimed for useful purposes to raise the efficiency of the engine. My idea is to wring as much efficiency as possible out of a small car engine by capturing the lost heat and using it for other things. In this way a small wrecked car could be bought for beans and only the engine and transmission used to provide electrical power (both directly and for charging banks of batteries when it wasn't running.) Large quantities of hot water could also be saved while it was running and then used for home heating or other things when it isn't running. The heat from the exhaust could also be used to power a steam turbine to provide more electricity instead of making hot water when that wasn't needed. I do have a common law patent/copyright on it.

The trick would be to get as efficient an engine as you could find and possibly even turbo charge it to raise that efficiency as much as possible. A few more benefits would be gained as apposed to using the engine to push a car down the highway and those are this. The engine would be using its full potential for making electricity instead of having to force a car through wind (Drag) and overcome the friction of tires against the road. It would also not be having to carry the weight of the vehicle and passengers. It would just be doing one thing. Creating useful power. Some day I hope to have such a system set up on my land and might even have it setup to run on propane instead of gasoline which would cut down on maintenance by about 2/3 because of the propane burning much cleaner. Oil changes could be cut by 2/3rd.