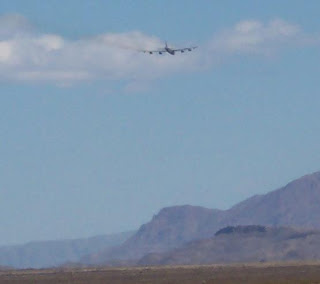 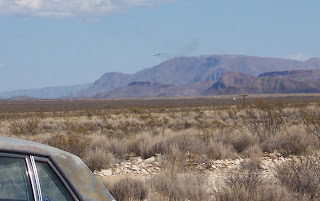 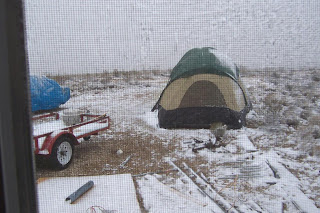 It appears as though the Air Force has a new secret weapon. Took the picture of a B-52 strafing this place yesterday and now we get hit by a snow bomb! Not only that, but it subjected me to what I think was by far the highest wind I've ever been in! (and I've experienced some mighty high winds being raised in west Texas to start with.) I wonder how effective it will be toward getting rid of insurgents? Sure is working on me because I'm ready to head a lot further south! (Maybe as far south as the equator!) Note in the picture of the snow that the guest house is still standing. I don't have a clue how because the wind was probably at least well above the minimum hurricane force. As near as I can figure the wind was blowing from out of the west north west and the guest house is east south east (down wind of the container). Maybe the container helped block some of the wind or the stakes being driven in to solid rock did the trick?

BTW I remember coming back from Viet Nam and stopping over in Guam where they were refueling the plane. It was a B-52 base at the time and one guy pulled out a camera and took some pictures of the B-52s out the window of the airport. An AP (Air Police) walked over to him and seized his camera, took the film out and then handed him his camera back with strict instructions NOT to take anymore pictures there. Hope I don't get busted for taking the picture above. ;)


I'm composing this offline because the internet here is hit or miss and its more on the MISS side than the hit side. May be a good bit later before I can update the blog. I'm probably going to be suffering from Cabin Fever in the mean time because I refuse to get out in this crap. (other than maybe a quick trip out to survey the wind damage.) At least I was able to make my morning coffee in here. I think its supposed to warm up a good bit tomorrow though??? Don't have a clue how much propane is left in the two tanks, but I sure hope they don't both run out today (or tonight!)
Had to make a trip to Study Butte to have both propane tanks refilled and on the way in I was thinking "Now WHY didn't I bring the camera? The mountains were still snow capped, and looked beautiful, but I thought maybe they would still be when I get back. Unfortunately only the higher ones were and not near as much. You can still make out the snow on the far mountain, but its gone everywhere else. 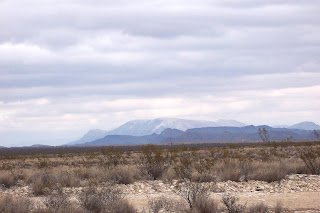