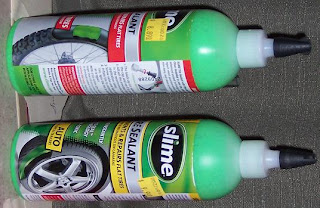 I hate it when I do things like this! Went to the hardware store here and was surprised that they had a shelf full of green slime. I didn't stop to think there were different kinds for different type tires so I just grabbed a couple of bottles. I know I really need 5, but have two spares so am trying to do this on the cheap.

Notice the labels. Both 16 ounce, but one shows a bike tire with tube and the other shows a tubeless auto tire. Not sure what the heck the differences is, but I guess I'll go back and get another one that has the automotive tire on it. Its $1.10 more than the other one. (another mystery) Anyway the one for the bike will likely do the trailer tire that hasn't been slimed yet. The other already has because it had been leaking down. Its small so maybe I'll go ahead and get two more and do the back tires and put some in the trailer tire and some in the car tires. Once the cold spell is over I might make it out to the road to start trying to round up the loose mesquite limbs with all the thorns on them and start chopping out the small trunks left in the road.

My brother in law came up with a good idea and that was to get some carpet and tow it along to pick up the thorns. Sounds like it might work. Anyone know where any old carpet is in this area?

All Slimed! Went back to the  hardware store and picked up two more bottles of the slime (for Car Tires). I slimed both of the fronts with the stuff for cars and then split between the car stuff and the bike stuff on both rears. I saved just enough out of them to do the last trailer tire so should now be good to go.

Now here's the deal on the balance and the difference between the bike stuff and the car stuff. The car stuff is thicker than the bike stuff and probably has more fiber in it. When I finished I took the car out on the road and the ballance was way off, but that was only for a short distance. Once the stuff had a chance to spread out and coat the insides of the tires the ballance seemed to go back to normal and no problem at all. If you use the stuff just expect to feel the tires being out of ballance at first and only for a short time. I haven't driven it again since then so I'm not sure if this will be the way it works each time you drive or not?