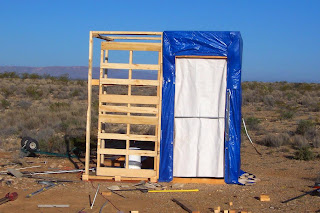 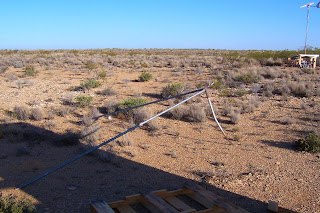 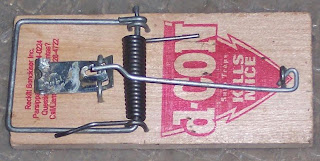 Just a shot of what I've gotten done so far to the It'll Du complex. Looks like now that I've had a day old shower at the BBMI I'll start cleaning up the dungeon to make room for Dale & Rhonda's air mattress in here so they won't have to put up their tent this trip. Now that I don't need heat in here the heater and cooker can go out side while they are here and with some more cleaning and moving stuff to the back there should be room.

Note the A-frame is no longer part of the shower. I'm thinking about using it and two more of the poles to construct a pyramid of some sort. Perhaps a guest house that should stand up to the high wind and elements. Might even try it out myself for a while once I get it done. That may be a while though. It will likely be all metal and stucco construction.

Yesterday as I was driving back from Study Butte I saw something dart out from under the dash and then noticed a tail curled up and sticking out from behind the shifter housing. It was really quiet a stimulating experience since it happened so fast I couldn't tell what it was. I leaned forward to see and it was a Kangaroo Rat as far as I could tell. I was going to reach down and try to grab the tail and fling it out the window, but before I had th chance it darted back up under the dash. I was too close to the dungeon to turn around and go back to SB for a mouse trap or poison so headed down to the legion to see if they had a trap I could borrow. They did so it will be in the falcon today.

Now before any of you Monk types start raising hell I don't  want to hear it! Rodents are real bad about gnawing on the insulation of electrical wiring and I can't be putting up with that! Also where there are rodents there are usually snakes sniffing them out and looking for them. I SURE don't want that! I've known some women in my life that would have bailed out of the car going 65 miles per hour just because of the sight of a rodent. I might do the same if it were a rattler. Lets call this self defense and be done with it. 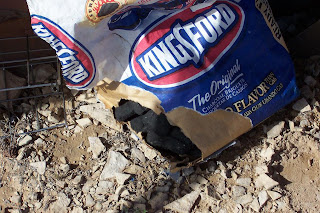 The Dirty Deed is done! (at least the bated trap is in place.) I noticed some insulation has fell out from under the dash so the little SOBz are already being destructive. Not only in the car, but outside to. Note the last picture I added where they have completely gnawed the bottom out of a bag of charcoal by the container. Evidently seeds aren't all they eat. Looks like they like paper to? I do know they like insulation to build nests out of. Next trip to town I'll also be getting some poison to! Guess I need to get some Rat Shot for the pellet gun to. Should come in handy for them and snakes to. I hear that one person here found 4 baby Mojave rattlers on their property and those are the deadly ones. See the link below the picture where that picture came from. According to one source (Just Me) an EMS person said to keep a spare bullet around for yourself in case of being bitten by one because you'd be dead before you could get to Alpine and the death would not be a good one. 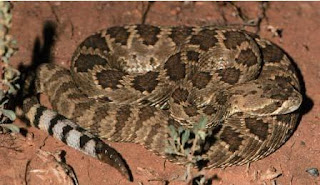 Mojave Rattler
Posted by tffnguy at 9:25 AM