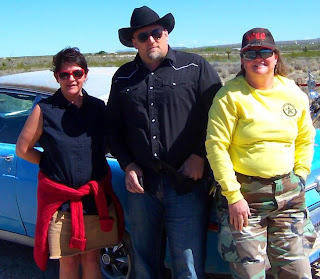 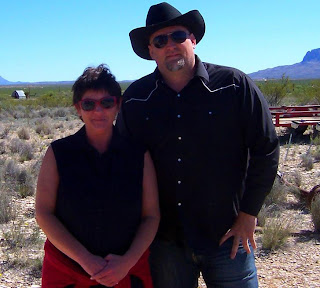 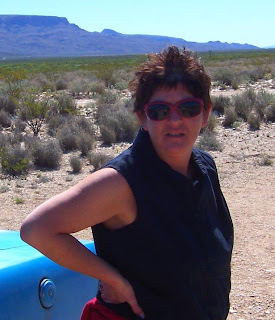 I'd heard that OGT was headed this way and then heard that MC was to. I was sitting out front after rigging up a makeshift evap cooler all afternoon and up came MC. Wasn't 5 minutes after she got here and here comes OGT. OGT took us to dinner (Supper to some of us rednecks.) at Tevo's place. I wasn't real hungry, but the food was good so it all got eaten. MC is supposed to meet us back at the dungeon tomorrow at noon and then hang out with us the rest of the day. Don't know about them, but I had a great time. OGT also came bearing some gifts that I can probably use. Thanks OGT.

*UPDATE*
We all had a great time at the legion last night for the fund raiser. MC surprised everyone by singing Patsy Cline's  "I'm Crazy" and you would have sworn it was Patsy Cline singing it herself! Man can that lady sing! Contrary to OGT saying that he wasn't good enough on the guitar to do any playing also surprised everyone by doing just that anyway and danged if he wasn't also a good singer and did great on the guitar to. He also got to play some sort of home made wash tub bass thingy and did very good on that to. MC was more or less the Bell of The Ball and both her and OGT now have a lot of new friends and fans.
Unfortunately I forgot to take my camera there, but OGT did let me take some pictures with his cell phone so when he send them to me I'll post them also.

Also unfortunate that OGT didn't read his reservations all the way through and didn't think his plane from Odessa/Midland was supposed to leave until this evening, but then found out he had to leave about 4:30. We had planned Breakfast and some target practice this morning, but by the time they had gotten here it was really too late for breakfast and they had to hit the road fast to make it to the airport. :(  Just Me and myself did do some target practice and then she had to go get ready to head for Midland herself. All in all it was great to have the visitors and now its back to the old lonely grind around here. 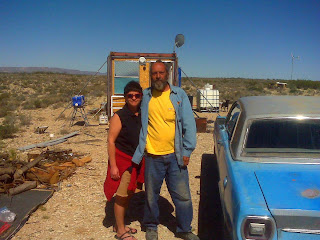 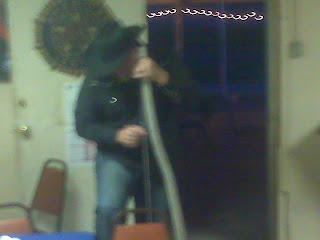 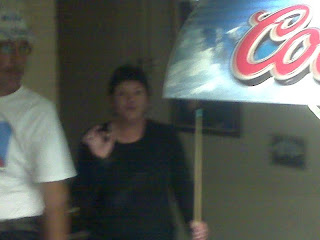 More pictures from OGT's cell phone. I was thinking he took the one of MC and me with my camera, but it was with his cell. Unfortunately the ones in the legion didn't turn out to well, but the second photo is of OGT jamming out on the tub and the third is of MC being caught with the pool cue.
Posted by tffnguy at 9:52 PM