Couldn't remember when I first set foot on Terlingua soil so back tracked through the blog. I've actually been here a little over 3 years. (Three years a month and a few days to be exact.) Things have changed a lot for me and most for the better for those who haven't read this blog from the start.

Today is Bigfoot and Littlefoot's third anniversary and I remember Just Me and myself watched John Wells marry them over the internet. Congratulations again you two! 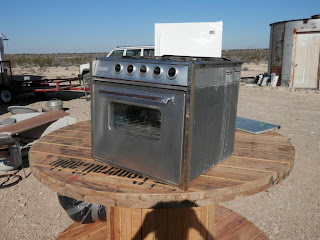 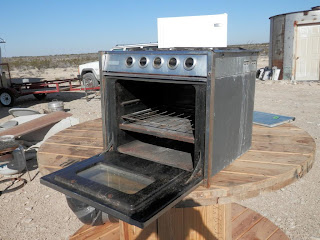 The little oven is compliments of one of my friends/neighbor Howard. It isn't real big, but should do everything I need it to do. (cook decent sized pizzas and who knows what else?) Its supposed to be a built in so I plan to build it in a small cabinet with wheels on it with the propane tank inside the cabinet like a propane grill. By doing that I'll be able to move it in the cabin in the winter to help provide heat and be able to cook meals without it getting too hot inside. In the summer I can move it to a small outside kitchen I plan to build eventually. I'd imagine the new fridge will stay in the cabin though. I'll probably build in a sink for dish washing both in the cabin and outside kitchen. 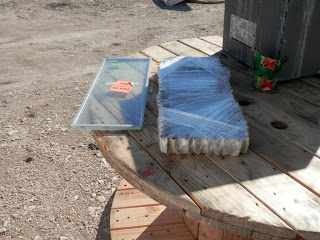 Bigfoot also brought me a couple more high E dual pain windows that I've decided to put on the south end. They are frosted but that doesn't really matter I plan to also double those to double the insulation value and they will mainly be for lighting during the day. 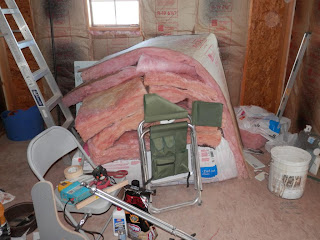 After Ring brought me another bundle of insulation to finish off the cabin Bigfoot brought me some more R19 insulation and it will come in handy because they are cut in 4 foot length pieces. I need several 4 foot pieces for the ceiling so I won't have to cut the other stuff. He also brought me some R30 that I can use for stuffing in areas where I can't use the R19 stuff.

Then comes Nick. He came buy and dropped off some R13 insulation and I'll probably use it to insulate the under pinning on the cabin. Should help both in the winter and summer since the floor isn't insulated. Occasionally Harbor Freight runs a sell on interlocking rubber tiles that are about a half inch thick and are made out of hard foam rubber. They are intended for covering garage floors, but since they are foam I figure they would have a decent insulation value so I plan to cover the floor in the cabin with those. Should be able to do that for under $100. I just may have enough insulation left over for the add on bathroom when I get it built.