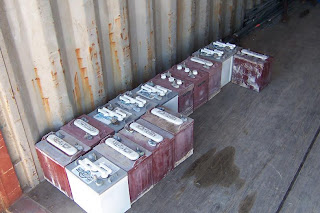 Spent the afternoon out at the land working over some of the batteries and taking measurements to see how to go about building the insert. I think I have that about figured out. Ran in to a snag on some of the batteries though because I hadn't notices that 5 of them are 8 volt instead of 6. That means two different systems because my wind generator is just 12 volt. Hopefully at least 3 of the 8 volt batteries will be usable to make a 24 volt system out of. The other 10 are 6 volts so I'll have a higher margin for having bad batteries and still come out with a decent 12 volt system. I can probably get more of either kind if I need them though. I left the 8 volt batteries there because I doctored them with the hot solution I took out there in an ice chest. I don't know why it was after I'd used all of the solution on them that I snapped to the fact they were 8 volt. Duah! Anyway I brought 4 of the 6 volts back here and will make a run to the Study Butte store tomorrow to see if they have any Epsom salt. I think I pretty well cleaned out the Cotton Patch of that already. Will be a real bummer if I can't find anymore around here! Even if I were only able to get 4 of the 6 volts working it would put me over the 800 AMP Hour Big Bend Telephone requires to get DSL.

I was standing in front of the container when a car drove up out front and a voice said Are you from Plano? I said yep so a couple of my neighbors Bill and Jacky pulled in and we had a good visit. Then my other neighbors from  down the road (Robert, his wife and daughter) were driving by so I flagged them over and they introduced them selves to Bill and Jacky. We had a hell of a neighbor visit going there until it started getting dark and cold so the party broke up.

I love the land there as rocky as it is, but the neighbors are great to.
Posted by tffnguy at 8:35 PM