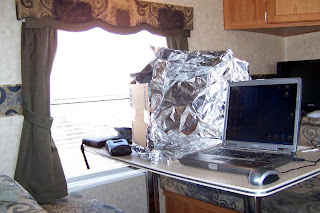 Since the internet has been so bad around here lately I decided to build a WiFi booster which is made out of cardboard covered with aluminum foil. Basically all it is is a home made Microwave dish. Unfortunately it isn't the WiFi causing the slow internet it is the internet connection its self. However, the monstrosity I built does wonders for the WiFi speed and when the internet is working right (like very early morning when few people or online) it really speeds it up.  I've always had to walk down near the cafe with the laptop on to get connected and then bring it back or otherwise it couldn't find a signal. Then the speed and connection was pretty slow. Now it finds the signal sitting right hear with a high strength. and instead of a speed of around 11 Mbps it usually connects from 36 to 54 Mbps. How it works is by magnifying the microwave signal and focusing it toward the WiFi antenna in the computer and then when the computer is responding the same thing happens again for the WiFi server. Now IF the internet ever gets back up to par around here this connection should fly! Of course if space is a problem then this is not a good thing, but one could be built where you could store it when you didn't want to be on the internet.

I plan to try and come up with an old satellite dish. (You know... the old HUGE ones) when I can and expiroment with it on the land. This principal also works for cell phones so if I could find a weak cell phone signal on the land then I should be able to point the dish in the direction of the signal. Stand in front of it and use the cell phone with a good signal. Should be good for many more miles.