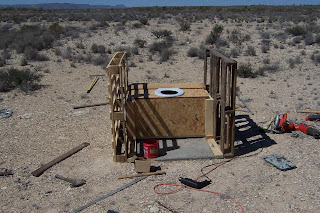 The PCOB is now officially named the It'll Du. Name sort of taken from a bar in Odessa Texas that I used to drop in on rare occasions. It will in fact Du for what its intended. The wind got a jump on me early this morning. One of my neighbors stopped by for a visit and just before he left the wind started getting up. Its now blowing at gale force (Maybe a slight exaggeration) so getting much done out there is not an easy thing to do. It has been coming up about 1:00'ish for the past several days, but this morning it came up about 10:40. I'm doing the best I can out in it, but am about ready to call it a day! I'd about as soon be working in a rainstorm! Of course the sand is with it to it is a sand storm.

As for the It'll Du I'm probably going to cover the inside thrown with some tarp material to cut down on splinters in the legs and any part of the posterior that might be subjected to the OSB board. I may also make It'll Du a convertible PCOB. Not to worry anyone else would have to be standing next to it to see what you were doing. ;) Then again it will eventually be fully covered and roofed.
Posted by tffnguy at 1:11 PM