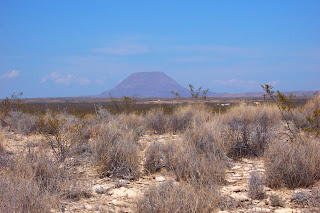 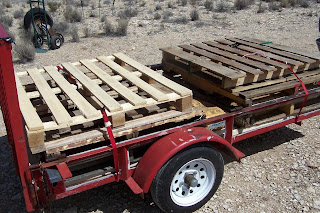 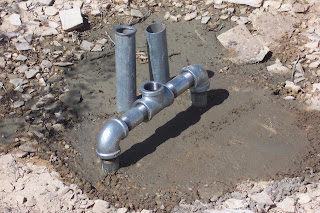 Took the falcon and trailer to Alpine today for supplies We car pooled, but one person didn't show. Oh well prices are higher in Study Butte, but not my problem. I got some of the wood to build an out house, but got to figuring when I got back and didn't get enough. I did take advantage of some info John Wells at the Field Lab gave me and picked up some free pallets while there so hopefully I can stretch what lumber I bought and the 6 pallets I brought back to do the build. Also used the setup I saw that he had for his wind generators. A swivel made from pipe to allow me to take it down and put it up a lot easier than it would have been the way I was originally going to do it. Used the two 80 LB bags of concrete my brother in law brought to cement it in and bought two more bags while at McCoy's in Alpine to anchor the outhouse with. I'll give the cement a couple of days to harden before trying to put the genny up and in the mean time I'll try to get to pole finished and maybe concrete in anchors for the outhouse. It got pretty darned warm today working out in the sun because there was very little wind. It has gotten up now though and is starting to feel pretty cool out.
Of course the first picture is the lone mountain I told Scavenger I'd post. Not great, but will have to do.
Posted by tffnguy at 6:46 PM