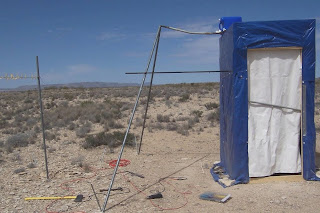 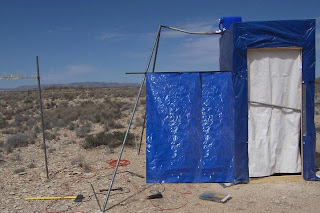 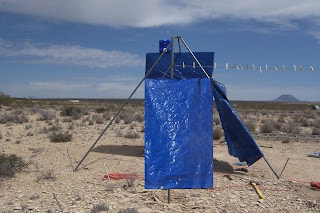 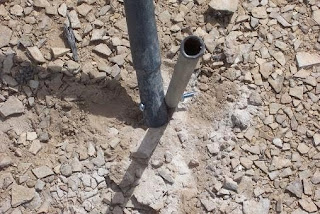 For lack of anything else to do this morning and limited on what I have to work with I decided to start on a solar shower. Add another point to It'll Du because it is part of the soon to be solar shower. First picture is a frame I built out of my cache of junk and hardware that I brought with me from Plano. And who says being an obsessive compulsive pack rat is bad? The first picture is of it attached to the It'll Du with a very long screw. Shouldn't be a problem there. The next two pictures after that are doctored to show how tarps will be used as curtins to block the view of the general public. The fourth picture is how I have the A frame bolted to the stakes which were pounded in to 12 inch deep holed drilled in to the rock. It ain't going no where as is.  The tarps will only be added at shower time and taken down after the shower. No High wind condition showers! I hear that gets pretty chilly anyway even in hot weather though.

I may use one of the blue containers at first and then switch to a metal tank later. I have the polly carbonate to build a solar heating box when I get the wood to build the box out of. Once I get more pallets I plan to add a piece of OSB board as a floor on top of one and cover it with a tarp to give something to stand on besides the jagged rocks. I also plan to get the plumbing fixtures to add a drain in the center and pipe it down hill to another container so the gray water can be used for watering plants later.

At first I'd planned to build a stand alone pyramid to make a shower out of, but I'd have had to loose the two prop rods holding the dungeon doors up against the sides. I'd have had to come up with something else to do that to so decided to add to the functionality of the It'll Du and it should work out good.