I guess the subject line pretty well says it all, but I'll add a little extra. May or may not add pictures later. Probably not because I don't see any beauty in Crappy. However, if the sun comes out and it warms to the 80s and the wind quits blowing then I might. Not looking for that to happen though because I think the high is only supposed to be in the 40s.

Well I guess I lied about not posting pictures. The clouds are breaking up a little and I actually see some blue sky in small patches. The pictures? Well... last trip to Study Butte and a trip to Study Butte Store someone had left the battery powered shower on the bench there for the taking. I picked it up along with a couple of LAN cables which I don't need now, but may later for some reason or the other. The black barrel is the one Frann gave me and I'd about decided to put it on top of the It'll Du/Shower for a gravity feed shower since I now have the pump that I used to the shower dedicated to supplying water to this trailer in the warmer parts of the year. I've been thinking I needed another pump for the shower though because 20 or 30 gallons on top of the It'll DU/Shower would be a darn heavy weight. I'd probably need to reinforce both to handle that much weight. 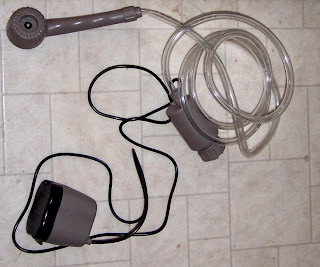 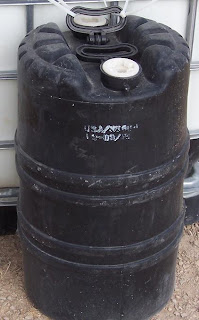 Now that I have this pump I've decided to keep the barrel on the ground like I did using the old blue container and that will simplify the process a lot. I won't have to use a splitter from the pump on my water tank and a long hose to pump water up to the tank on top of the It'll Du, I can use the two wheel dolly to move the black barrel back and forth between the water tank and shower to keep it  filled and won't have to reinforce the out buildings.

I checked out the electric shower after I got it back here and it works. It works off of 4 D cell batteries though and I don't plan to be buying a bunch of those batteries just to take showers. I still have the two golf cart batteries that never came around as far as using them on the battery bank, but between the two they will make a good 6 volt battery. I plan to use those as a power supply for the shower pump since it is 6 volt and I also have a 6 volt light that I will run off of those batteries to. I have a small 6 volt solar panel to keep the batteries charger to 6 volts so I should be good to go with this setup for both showers and lighting in the It'll Du.


UPDATE
Just had a visit from John Wells and he dropped off the other half of the Diego Burger he got at the Starlight Theatre and couldn't eat. I'd jokingly posted on his blog to bring me the other half and danged if he didn't do it. Now I know what my lunch is going to be. 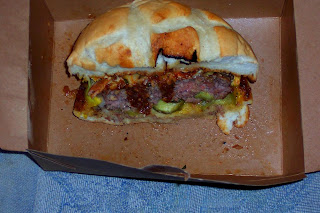 Now earlier this morning I'd gotten an email from Frann saying her and her neighbor were going to be here around 1:00 for her neighbor to pick my neighbor's brain about some electrical stuff. She says stuff like that is too boring so I suspect her and Hell Dog will hang out here while her neighbor is visiting my neighbor? Its 2:40 now and they haven't shown yet, but if they show real soon I'll split the burger with her since it is a whopper and I probably can't handle the whole half by myself. Then again I'm sure getting hungry smelling it so they had better get here quick!
Posted by tffnguy at 12:31 PM