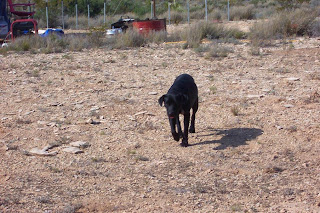 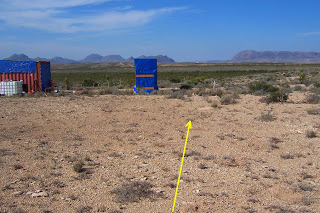 Notice the Pass that the arrow is pointing to. Supposedly from what I've been told is that the directions of the most fierce winds are from North or South or South to North. (Although I've seen some pretty fierce winds coming from all directions). However, its said that some times wind coming from north to south will be going through that Pass and some times it will reverse and be even higher coming back. At any rate most people down here say it is best for RVs to be facing North or South, but not all are parked that way. I guess its sort of a crap shoot...  BTW the arrow is actually facing South south west. The sharp pointed peak almost hidden by the top left corner of the It'll Du is south. Bigfoot, Littlefoot and Underfoot's cabin can be seen more or less where the arrow is pointing.

Update
Got tired of sitting in the coolest? place in the dungeon (see below bucket in the door) When I went to the legion for ice someone had dropped off a bunch of JUNK like they do at various places in this area (supposedly to help people out) in this case it was all junk. Anyway one piece of junk was the pot in the second picture. It was too screwed up to use for cooking, but I figured it might make a water bowl for Pepper so got it. I don't think she will dump it and take off with it like she did the plastic ones before I sacrificed one of my parts buckets for her a water bowl. Now I was able to reclaim my parts bucket for my parts. I started loading the bucket back up with parts, but it was getting hot out in the sun so I'll finish that in the morning. 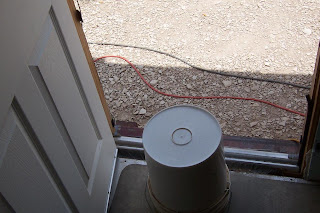 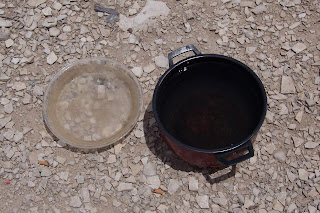 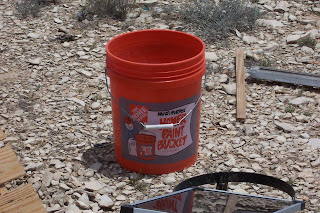 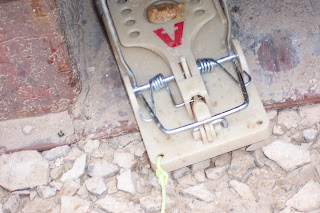 Also got some WD40 after the rat trap because something was either eating the bate without setting it off or setting it off and not getting caught.
Posted by tffnguy at 10:35 AM