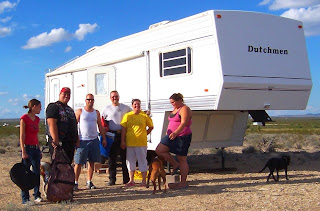 Above left to right... Ashley who is Dwight's spouse. (Dwight being my grand Nephew) Dwight, Johny Bollinger (my newly adopted Nephew) Rarely done other than to good people!, then there is Dale which most know is my nephew, Rhonda (Dale's wife) and Norma Jean my grand niece. Of course Pepper is seen walking away from one of her newly found boyfriends. (Probably to go visit the other one) What a fickle girl she is! 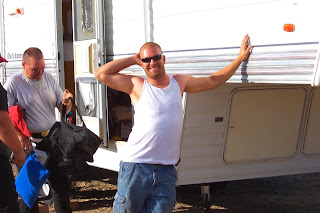 Johny who is the guy that brought the RV down here from AZ. Great guy and a real card! 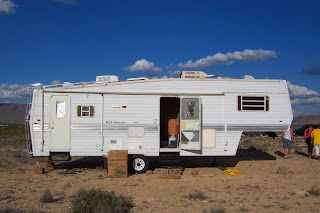 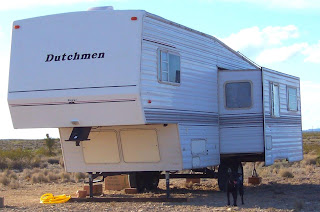 Here you see Pepper posing with her new home. She seemed to like it real well at first and explored every cranny. However, now that the wind is really high and the trailer has been Rock'in &; Roll'in she seems to not like it too well. Matter of fact I think she would just as soon go back to the dungeon. Oh well... the poor girl had better get used to it. I hear we have some really bad weather and a lot of rain on the way. BTW I'd almost forgot about how the wind was in RN and RV's trailer at the BBMI. Guess I'll have to get used to that again to because it is much cooler in here!

I did spend a good bit of the day redoing some really screwed up stuff some previous owner had done. Got the over head AC working as if I could afford to run it, but at least that and a few other things are back like they came from the factory. Lots more to do, but it will get done as I can get to it.


Big fight at the Legion
Went to the Legion for  a couple of happy beers this afternoon at the legion this afternoon and we got treated to a fight. Not what you think though! It was out front on the patio where a Vinegaroon and a Sun spider. 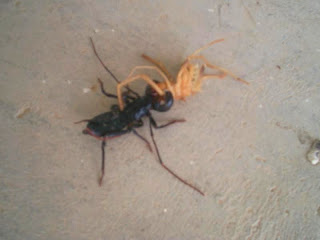 Photo by Dave Secor
Posted by tffnguy at 9:19 PM