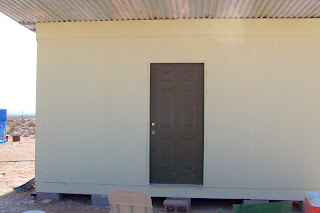 In the process of painting the cabin. Lee my neighbor who is a retired painter insisted that I paint the cabin with Oil Based primer before putting a top coat on it. He supplied 5 gallons of the primer so that got done before I finally painted the front (Picture above) with the acrylic paint Bigfoot brought me. I wasn't sure I'd like the color of the paint that Bigfoot brought, but now that I have the front painted I like it very well. Lee also helped prime part of it and Dave Secor did some touch up work on it. In case you can't tell the color is a very pale lime green. 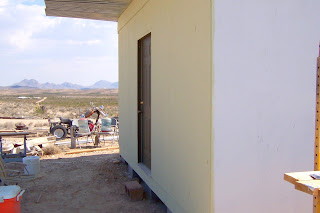 View from the north east shows the primed side and painted front. 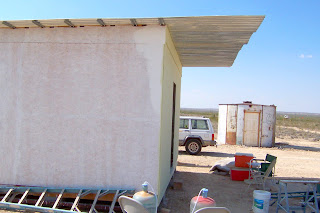 Pay no attention to the two 5 gallon water jugs in this picture. That is just a high octane wine brewer. Decided to try my hand at wine making and it turned out real good. (5 gallons of it) 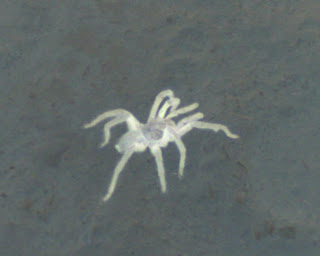 Where's the rain? I'd always heard these guys come out only before it rains. Not so I guess. This was taken a couple of nights ago after I barely saw it because of the dark.

I finally got over my fear of falling and went back to work on the cabin. It wasn't without injuries though. In the first photo you see the red X on the fascia board that I was trying to put up when I fell off the ladder and broke my arm. It seems that the same board was out to get me all over again because the wind caught it while I was again trying to put it up and the edge hit my forehead and cut a small cut on it. I did managed to get it up though (Without falling and breaking something else.) My wrist still gives me a lot of  trouble, but I've been able to use it even with the pain. 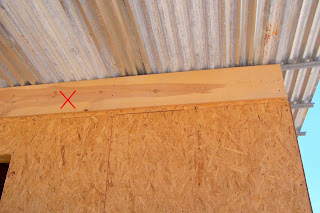 Next picture is of a screw up I made on the fascia board on the south side. I cut the board right, but then marked the holes that were supposed to fit over the purlins wrong and cut them out before trying to put that board up. Needless to say I had to cut the holes in the right place after discovering that. Now I'll have to patch over the wrong holes with something? Haven't figured out what with yet though. 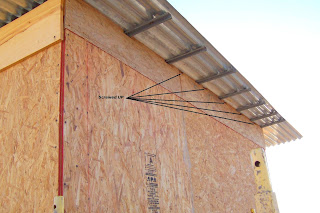 Next picture is of the north side done right. 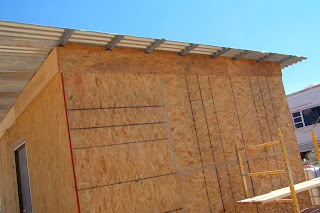 The door is now in it and this almost makes the cabin dried in, but not totally. It will have to have the roof coated with sealant before that is done. 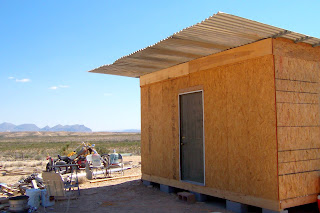 Before I could add the fascia board on the front I had to come up with some way to hold the purlin on the front down because who ever added that back when the roof party was going on only screwed it down on the ends which was letting the wind lift the roof up in the center. As a quick fix when I caught that happening I used nylon straps to hold it down until I came up with the solution in the next picture. (Using plumbing strap to hold it down.) Once I got that taken care of it was time to get back to work on the cabin. 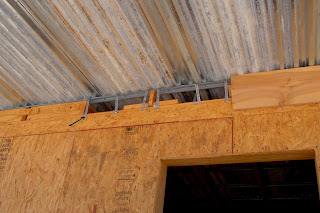 Next step will be to paint the cabin and then add a 4'x8' bathroom on the back. That should give me enough room for a toilet, shower and small vanity. The gray water from the shower and vanity will be plumbed to a catchment tank for watering plants and such while the toilet will go to the septic system. This is all going to take a while to happen, but in the mean time the trailer is connected to the septic system now.

After the bathroom is done I plan to start working on an 8'x16' screened in porch on the front of the cabin. I guess it could also be called a sleeping porch when its done. Again this is going to take some time, but in the mean time I need to brace the front roof overhang to the cabin to make sure high wind doesn't have a chance to rip the roof off. I think I already have that figured out though.

My neighbor Lee was a great help in getting some of this done yesterday and he also brought me a load of water since my tank was getting pretty low. Dave from the legion came down the morning before and helped out some also.

I still need to cut in some windows, but that isn't a priority right now as it can be done about any time.


RIP Ben Woods
Just read on John Wells blog where Ben Wood passed away. I hate to hear that and he will be missed. His blog is/was: 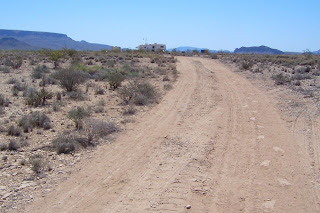 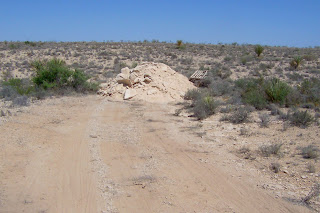 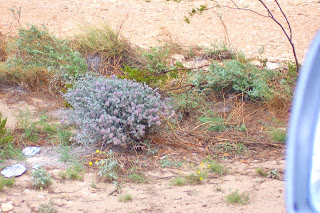 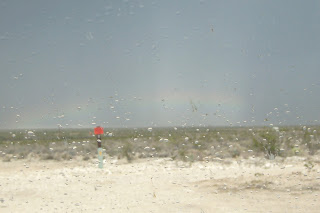 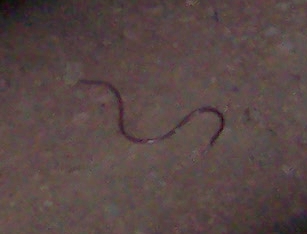 Stepped out the door night before last to find this little guy slithering along. At first it looked like a real long worm, but then I noticed it was moving to fast for that. It was actually a baby Red Racer snake. (They're good snakes because they are shy of humans and they eat rattlesnakes and rodents.) I let it go free. Its easy to see why they call them Racers. Even the baby ones move like lightning! 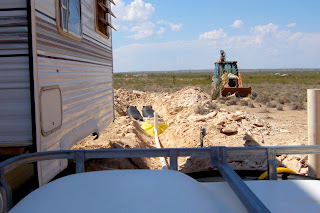 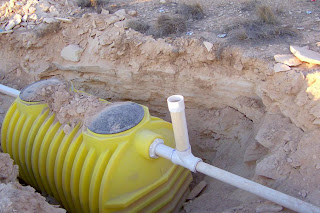 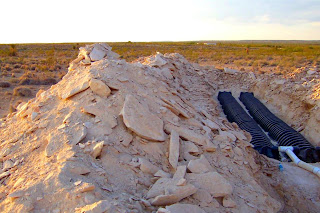 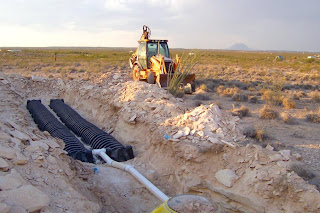 The septic system got installed yesterday. AG the installer couldn't find any loose dirt on this property because its pretty near all rock as can be seen in the pictures. It could be used now if I had it hooked up, but that will take a little time.  The county will be bringing out gravel Monday to fill it in and then the debris (Rocks and Dirt) will be dumped out back on this property. More on that in a later post. The larger Ocotillo (seen in front of the tractor) that got hit by the flying steel siding some time back is next to the drain field and is doing well even though I though it was a goner. I have a feeling with it being so close to the drain field it will grow pretty big pretty fast. I just won't be making anymore tea out of the blooms. ;) 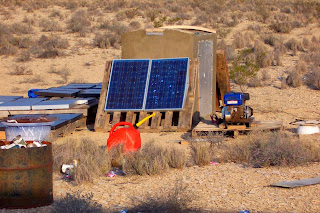 Added another 160 watts of solar to the main array and will be adding a lot more as I get the chance. This time I faced 80 watts worth toward the east to get a quick start to charging in the early morning and another 80 watts toward the west to take advantage of the late evening sun. By the time I get all panels connected up there should be around 1500 watts of power which would run a small refrigerated AC. That sure would be nice right now! Wow! I'll really be up town with indoor plumbing and refrigerated air! 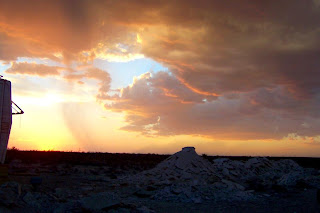 Clouds coming in before last night's storms. There was another 3/10th inch in the gauge this morning and night before lasts storm brought 1/10th. There's a 30 % chance of more storms today and tonight and I think the same for the next few days. Its slowly adding up!

Yep the Grub Shack is closed again. There are conflicting stories on this to so I won't be posting either one since I don't know which is true and which isn't. Now its back to the 46 mile round trip to eat out for us in this area. What a BUMMER!
Posted by tffnguy at 8:58 AM 29 comments:

My neighbor Robert Dawson gave his PU to his daughter for her birthday and needed to buy another one for himself. He found one in Odessa that he wanted, but he needed a ride there to get it. I was wanting to make a trip to Big Spring to the VA hospital to find out why they never got me back in th system after 6 months of waiting and filling out the paperwork twice in that 6 months and sending it in. The VA rep in Alpine was the one that addresses both envelopes and when I got to the VA hospital two different people told me that they never received them???  Now that either means that the VA rep addressed them wrong or someone at the VA hospital trash canned them? Robert had had a similar experience trying to get back in the system also so we both went to the VA hospital in Big Spring on Thursday. Fortunately that's only 60 miles from Odessa.

Anyway it took all of 15 minutes for both of us to get signed up and back in the system. I was given my letter of acceptance immediately after the woman put me back in the system. Now I need to make an appointment for a complete physical and go from there. Of course we stayed at Ring and Raye Vern's house while we were there.


The HEAT
According to JW it was 112 degrees Saturday and I'm glad I missed that because I didn't get back home until yesterday afternoon around 1:30. It only got up to 109 here yesterday, but there was very little wind at all so it really felt like 109 especially since I'd gotten use to being in and sleeping in air conditioned comfort while in Odessa. I managed to get through the heat of the afternoon by keeping a wet towel to wipe myself down with occasionally and on my head and neck between wipe downs. I also had the swamp cooler blowing on me (without water to it because the pump part is broken.) Just as well because the water is so full of minerals around here that it totally screws up the pad and cooler within a couple of weeks and it also uses way too much water on top of that. (About 8 gallons a day) I guess using the wet towel will be how I make it through the summer. This all  happened sitting under the shade of the roof overhang in front of the cabin.

Due to conflicting information this part has been removed. (Only in Terlingua!)

Sorry no pictures this time. Just haven't taken any lately.