Only in Terlingua and probably at the Legion would such a party happen? A few days ago while a bunch of us were there I told Sunny I could use a hair buzz since she had been known to buzz hair there before. Just Me heard me say that and chimes in that she could use one to. Well Dave heard that and said he could use a buzz  to and then Just Me (Julianne) said lets have a hair cutting party. Everyone there agreed and it was held last night. 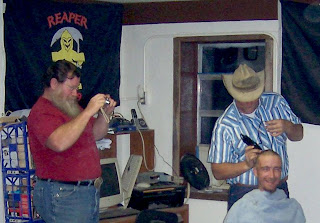 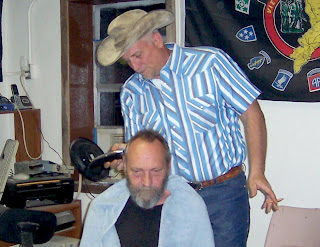 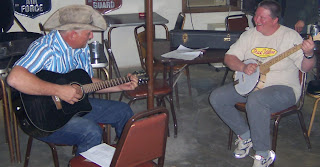 Nick not only did most of the buzzing (Dave did Just Me's), but him and Just Me provided entertainment. Julianne on the banjo and Nick on the guitar. (See video below) 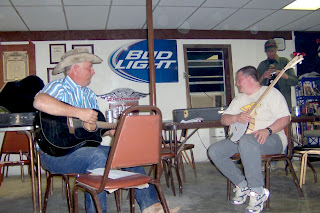 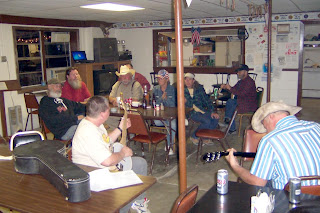 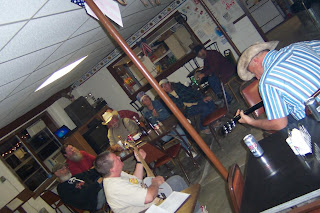 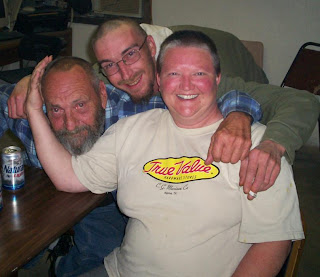 Right to Left (Julianne, Dave & Myself)


Julianne provided a big pot of awesome spaghetti and garlic bread while Marian provided chips and some great dip. I provided another pan of whiskey fudge.

I've been doing a lot of research to figure out the best and strongest way to build the hut, but it looks like I may use a combination of old building techniques and new (Advanced Framing) The new method uses considerably less lumber, but it isn't good for high wind areas which it would be facing here. I think by using a little of the old method with the new I could still build a hut that would be strong enough to withstand the high wind. The newer method of building not only saves lumber, but its also about 30% more efficient as far as energy to heat and cool it and I really want it as efficient as I can make it.

I've also decided that it won't cost much more to add another four feet on one side to make it a 12x16 rather than a 12x12. That will give me the extra room for a small bathroom, small kitchen stove and maybe even a small closet and / or small fridge and still have pretty near a full 12x12 living space. I'd call that much better than only having an 8x12 living space if I'd tried to add all of that to a 12x12 building. That was basically the living area in the dungeon and it was too tight.

Main problem I have now is that my trailer isn't long enough to haul some of the lumber I'll buy and I really don't want to scab shorter lengths together to get the lengths I need. I'll have to figure something out on that. My neighbor plans to get a big order from McCoy's and have it trucked down here, but that won't be until he gets his tax refund so that may be a while away and I'm getting itchy to start pretty quick since I'd like to have it finished by the beginning of summer.

I plan to build bunks for it something like I did in the dungeon, but have them fold up against the wall when not in use to allow for more day time living space.

The Foots (Bill, Caren and Underfoot) pulled in a couple of hours ago in a rental pickup. In the back was yet another gift! Enough lumber to frame up most of a 12x12 Hut. I'll have to buy the studs,  insulation, and drywall, but that's a drop in the bucket compared to this load. Once I get the studs there will be enough for the flooring, roof, and outside covering to build a completely enclosed 12x12 building. Now all I have to do is figure out exactly where to build it, get the concrete for piers and get after it. Hopefully by the end of spring it will be livable. I should have enough of the corrugated iron Just Me gave me to cover the roof and set up catchment with it. 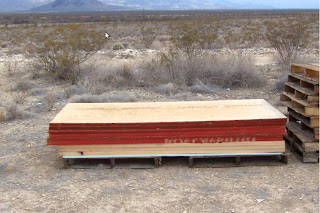 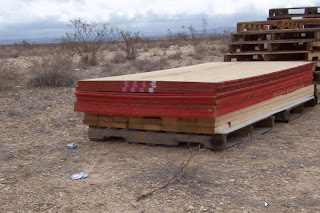 I plan to rough it in for a small bathroom and shower just in case I ever get a septic system. I'll probably build a small building for an external kitchen out of the pallets Ring and I have brought here.

Saturday there was a feed at the Legion and I do believe it was the largest crowd I've seen there so far. All of the tables were full during the meal and about four of us sat outside in the cool wind to eat. One of the guys (Dennis) had a tripod setup with a large cross section of a tree trunk on it for a target and we threw tomahawks and knives at it. That is a very addictive thing and I plan to build my own here to practice. I actually got pretty darned good at it.The actual targes is a playing card right in the center of the wood and Juan managed to get a bull's eye on that throw. Scoring goes like this. Hitting the wood target anywhere other than the card is one point. Hitting the card is two points and cutting a piece off the card gets you three points. 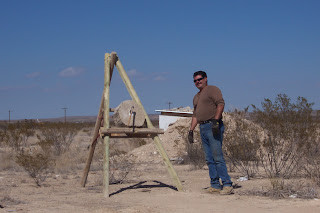 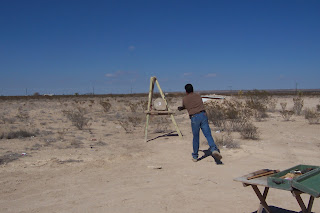 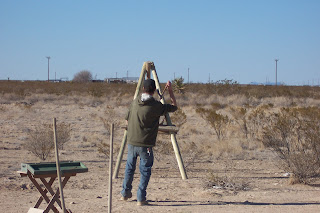 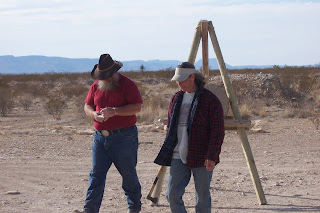 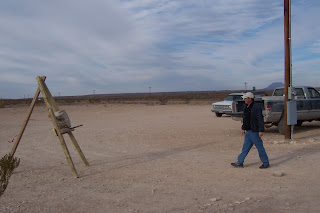 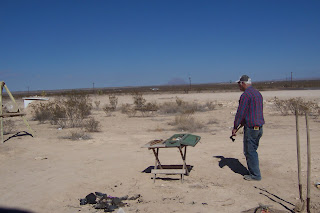 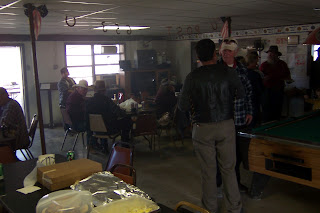 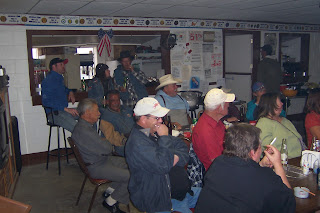 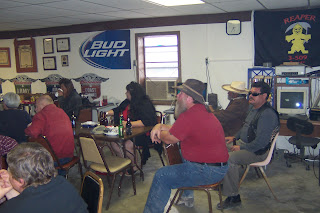 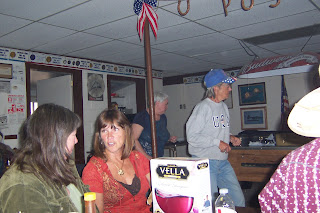 Picture above is a couple of the women line dancing to the music. There were a number of musicians there and they took turns playing and singing and some times joined in with each other. 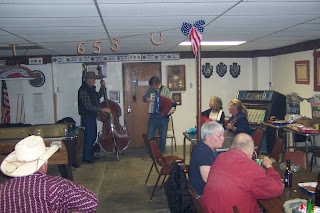 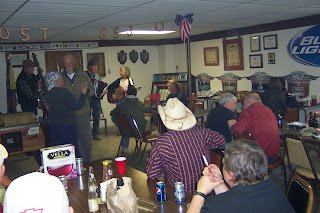 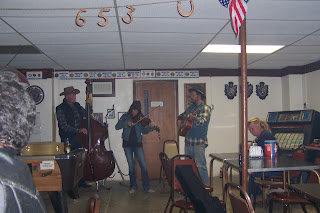 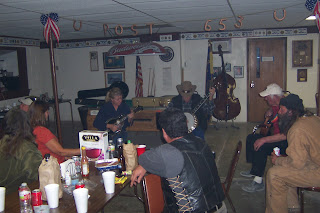 And then... One of the local Sheriff's deputies (Paul) showed up with his guitar and finished up the entertainment by playing and singing. I think he missed his calling because he is a hell of a musician and singer. 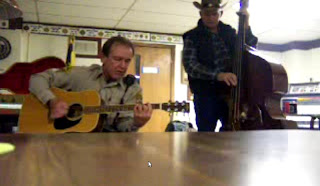 Lee supplied the pig for the feed and it was cooked under ground in a 55 gallon barrel. 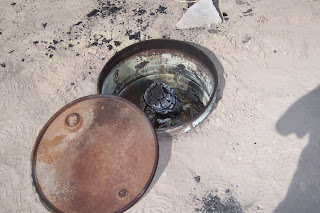 Needless to say everyone had a great time.

BTW it rained and misted off and on yesterday and last night. The gauge shows about 1/3 inch. I think its over now though even though its totally cloudy. 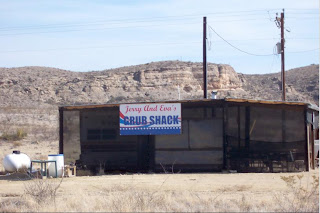 For lack of anything else to post I figured I'd pass on some local news. First off I talked to Jerry at the Grub Shack last week and asked him if there was any good news on it opening back up. He said no, but he's still plugging along trying to get everything done so it can open back up. No time set since I guess he doesn't have a clue. 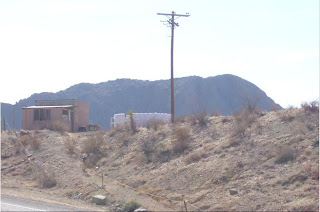 The EarthBag going up just south of Study Butte on 118 seems to be coming along pretty fast. Looks like its about time for a roof to start being built.

Speaking of Roofs I spied a HUGE disassembled satellite dish in Alpine the other day and boy would I love to have it for some sort of roof. Its a huge commercial dish and I know it is at least 20 feet in diameter. (Maybe even larger) It would take a semi to get it here though and would take a crane to set it on top of what ever it was going to become the roof for. I don't think its for sale though and it would probably cost more than I could afford even if it was. 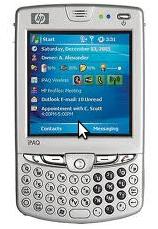 The 9 Point Ranch manager told me that Big Bend Telephone has contracted with the ranch to put a tower on top of 9 Points Mesa. Someone else told me the same is going to happen on top of Elephant Mountain (some 35 or 40 miles north of here) When that is done that should open up cell phone traffic all the way from Study Butte / Terlingua to Alpine. That has always been pretty much of a cell phone dead zone. I might even get another cell phone then, but considering I couldn't get much in the way of reception from here I dropped my old one.

This is good for cell phone users and will probably also open up internet to all in this area that are too far out to have cable run to their place. Not real good for me though because at one time when they were putting in my DSL and phone I got the impression that they might want to put a tower up here and of course if they had I'd have gotten paid for it. This is pretty near the highest point for miles all the way around except for 9 Points and Black Hill. Oh well...

As for the 48 LED lights I posted about a couple of blogs back I rode in to Alpine with my neighbor Wednesday and we checked on those lights while we were at AutoZone. They only had one and it was on sale for $7.95 and my neighbor said he had to pay $21 for the one I posted on the blog. I snatched the only one they had and asked if I could order more. They ordered the only ones left in their stores for miles around and said they would be in yesterday (Friday). I ordered one more and my neighbor ordered three more. I made a ride share back to Alpine yesterday for groceries and such and picked up the other lights. I'd used the first one for several hours Wednesday night and again Thursday night and I noticed when I had it and the new one side beside last night that the first one had gotten much dimmer than the new one. Evidently they put a pretty heavy drain on the AA cell batteries in them so I suspect that may be why AutoZone had them on sale and are probably dropping them from their merchandise line? I plan to convert my two to run off of the battery bank and solar panels on this trailer so the lights eating the small batteries won't really effect me and the two lights really help the lighting situation in here.