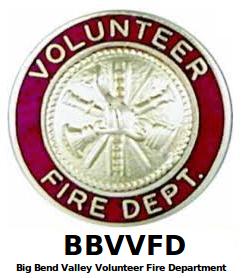 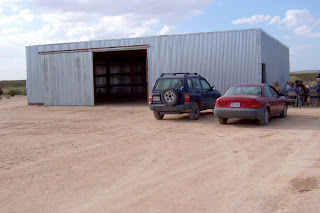 First meeting of the BBVVFD or Big Bend Valley Volunteer Fire Department. This all went well until one of the potential members decided he wanted to run the show after a unanimous vote for the Fire Chief. That member and his wife chose to leave after he didn't get his way.

Second picture shows our fire station. Actually we only get half of it as it will also be used by the building owner to store construction equipment at times. The Fire Chief from the Study Butte/Terlingua fire department was supposed to show up to add input, but he didn't make it. The meeting was a success without him and despite the other two people leaving.

The manager of the Cowboy Mine has said she will make sure any tanks we get will be filled with water. Lee's pickup with a 400 gallon tank, pump and commercial grade fire extinguisher is our first fire truck and more equipment is expected to be donated by other fire departments. Including fire suits and accessories.

If any of you moving down here full time want to join let me know and I'll pass it on. There will probably be a monthly meeting.
Posted by tffnguy at 11:03 AM 11 comments:

Odessa
Just got back from Odessa yesterday after a few days there to visit family and keep an appointment at the VA clinic there. I've noticed going and coming back each time that the highway (I 20) is really trashy. Used to be that the cities of Odessa and Midland took pride in keeping the highways clean and well groomed around them but not anymore. Seems that all of the out of state and out or area workers are not so keen on keeping it clean because there is trash littering the highway for about 20 miles. Too bad people move there during oil booms and evidently all they are interested in is making $.


VA
I made the VA clinic and I guess I got my wish to get back in the system. It was actually an evaluation, but I had a bad sinus infection again and needed help with that. Had to sit in the waiting room for about 5 hours before the doctor could squeeze me in between other patients. I have two more appointments for September and yesterday they called and told me I have at least one more at the hospital in Alpine and will probably have two more after that.


New Project
My older brother in law Clinton Noble had a couple of old handicapped electric wheel chairs he no longer needed and my sister Ann wanted them gone so I wound up with them. 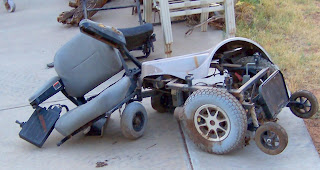 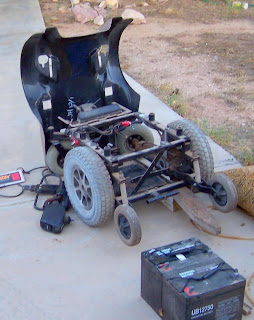 All four batteries were real low on charge and some wouldn't take a full charge so I got the stuff to doctor them and Ring and myself spent a good while doctoring them. Looks like all 4 will come around with a little more time for the Epsom salt solution to work on them. My plans are to make sort of a Moon buggy "Terlingua style" out of them with 4 wheel drive and all wheel  suspension. I really don't need another project, but will put some of the others off until I can get this done. I'll keep the batteries  charged off of solar so it will be a free ride to the mailbox, Legion and to explore on. I couldn't haul them in the Jeep so Ring will have to bring them on the next trip down here. I may go ahead and build the buggy with the gas powered charger on it so I could extend the range indefinitely and be able to pull up to the battery banks and charge them also when I'm not riding it. My nephew Pat came up with a couple of added batteries, but I only had room for the four other batteries. We doctored those two and Ring will keep them on a solar panel to try and get them back in shape and bring them later.


Santiago Peak
Yesterday evening it was cloudy to the west and it so happened there was a break in the clouds just enough to allow Santiago Peak to be lighted up. All of the other mountains were shrouded in the clouds shadows. I tried to take a picture with my binocular camera and get a really good close up picture, but that camera malfunctioned and wouldn't take so I had to revert back to my old camera. 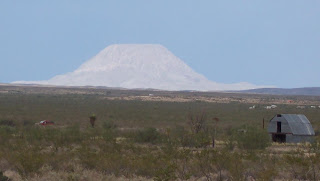 Just had a brief storm here with torrential rain, high wind and lots of lightning. It didn't last long, but it was still lightning around the area. I thought twice, but my curiosity got the best of me and I walked back to the dam to see if I had a pond. 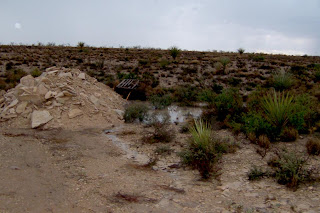 This was with 3/10th inch from the storm. 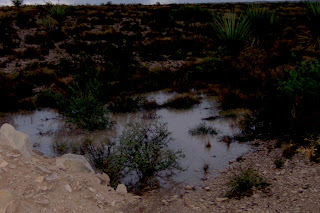 Looks like the dam could use some work, but looks like it will fly with enough rain.

I witnessed lightning striking and starting a fire for the fifth time with the rain putting it out about as fast as the lightning started it. I know the general area it struck and it wasn't far away. Should be somewhere northwest of here. I'd say about a third mile. When lightning strikes sand it causes what is called a Fulgurite. You can search on the term to see pictures of some found. Anyway knowing about where it struck I may go see if I can find it if I ever get a set of snake boots or may try it in the winter time.

Just noticed more damage from the trip to Alpine the day they were graveling 118. Believe it or not the headlight still works on both low and high beam. I'll still be out the cost of a new bulb before I can get an inspection though. 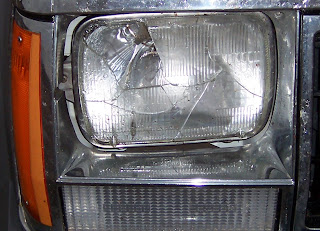 Song of the When Ever.

One of those nights.

Got back from Alpine, but it wasn't a normal supply run trip. When I got to the legion to pick up Dave for the run a car owned by a man and his three sons that moved down here recently was in the parking lot with a blow out. They were coming back from Alpine about 3:00 this morning when they had the blow out. They didn't have a spare so shredded the tire the rest of the way limping to the legion from about 5 miles out. They spent the rest of the night sleeping in the car. Anyway one of the sons rode in to Alpine with us to get a new tire so we dropped the rim off at the tire store in Alpine and did our shopping before coming back. We picked up the new tire on a rim and when we got back to the legion it was the right tire on the wrong rim!

(Wouldn't even fit on their car) I don't know what they are going to do, but I refused to go back to Alpine because they have just re gravelled 118 and I now have 5 new dings in the windshield from on coming traffic throwing up gravel. I was going to get a windshield repair kit at AutoZone while I was there, but forgot it since it wasn't on my list. Hopefully I can get one and repair the windshield before it starts cracking out and can't be repaired.


Memorial for Tim Benner
A message from Just Me:
"
I've just posted this to several of the Yahoo Groups where Terlingua Ranch stuff is discussed.  I know some of you don't follow those, but didn't want you to miss out.
Julianne"
Susi asked me to post that there will be a pot-luck memorial for Tim this Saturday at 6:00pm at their Quonset hut (formerly known as Susi's Snak Shack) 1 mile in from the highway on Terlingua Ranch Rd.
Tim & Susi were both long-time residents out here and had both worked at Terlingua Ranch for many years.  They moved to Big Spring about a year and a half ago to be closer to family and healthcare.
Here's the post from this week's Terlingua Moon...
Long-time local, Tim Benner, passed away at
his home in Big Spring, Texas on May 3rd. His wife,
Susi was at his side. Tim had a long battle with lung
cancer a few years back, and it appeared that he had
won that fight; Tim was high-energy, fun-loving and
active up until the last few days of his life. He had
planned to bring a truck-load of lumber to Terlingua
on the Saturday he had a seizure that led to his
hospitalization. An undetected cerebral metastasis
caused Tim's death a few days later. Tim was the
classic desert character; he will be missed.
Tim and his wife Susi were the proprietors of
Susi's Snak Shak. Susi invites all their friends and
loved ones to come to a Pot-Luck Memorial for Tim, to
be held July 14th at 6 p.m.
It will be at their Snak Shak Quonset-hut building,
1000 Terlingua Ranch Road. Bring food to share, BYO
Beverages and bring a load of hugs and love for Susi.


But I'm paying the Legion to use their dumpster now so this news doesn't mean a lot to me. Of course potential volunteer fighters need to keep an eye pealed. ;)

Just Me (Julianne Braun) just tipped me off to this.
Posted by tffnguy at 7:37 PM 10 comments: 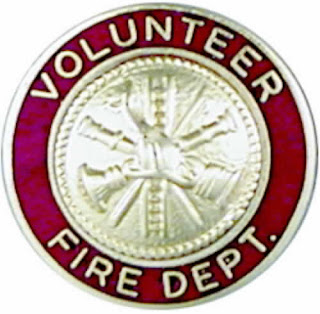 Tuesday night my neighbor ??? came over and said he had been checking in to starting a volunteer fire department in this area. He said he talked to one of the judges and a couple of commissioners (not ours) and they told him to just do it. I called several of our friends around here and got them to come over and we officially started the department.


If any of you living in our area want to join let me know. We are about 25 miles from the Terlingua / Study Butte fire department and at least 60 from the one in Alpine so this could be a good thing. 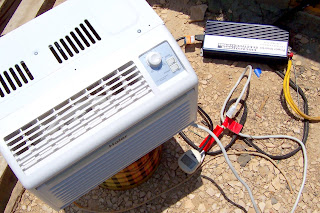 Ring brought me a 5500 BTU AC unit Sunday along with a larger inverter and more solar panels. I still haven't wired in all the other panels I had here already, but that will happen before long. Problem is that the inverter he brought didn't have 12 volt wires to connect it to the battery, but I used what was left of some burned jumper cables to make those out of. The AC was pulling 1000+ watts and it shouldn't have been pulling but about half that so it looked like the inverter he brought wasn't going to work. 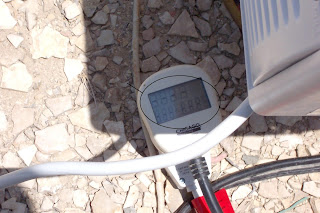 The watts here (Although hard to read) says 888.8 watts. This was with the AC sitting by the battery hut and hooked up directly through the watt meter which bypassed a hundred + feet of extension cord feeding the trailer. This was today and when it was showing over 1000 watts it was running through the extension cord. What all of this means is I'll be building  another battery hut next to the cabin and running larger wire to supply it. Also the wires I made for the inverter proved to be too small so they will have to be replaces with larger ones. Between all of that it should get the watts down on the AC to where they should be and I should be good to go as far as running the AC in the cabin. 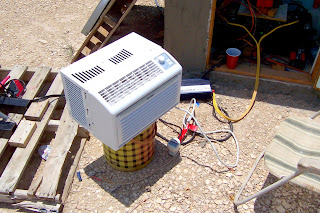 This picture shows where I was testing this out today. 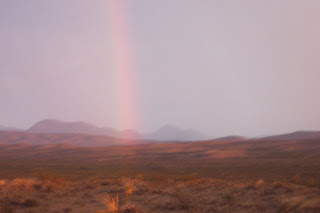 Though hard to make out the above picture is of a rainbow end in the valley below here. First time I've ever seen the end of a rainbow close up. I ran down there to snatch the pot of gold, but I guess a leprechaun beat me to it because it was already gone. DAMN Leprechauns! Its currently sprinkling again.