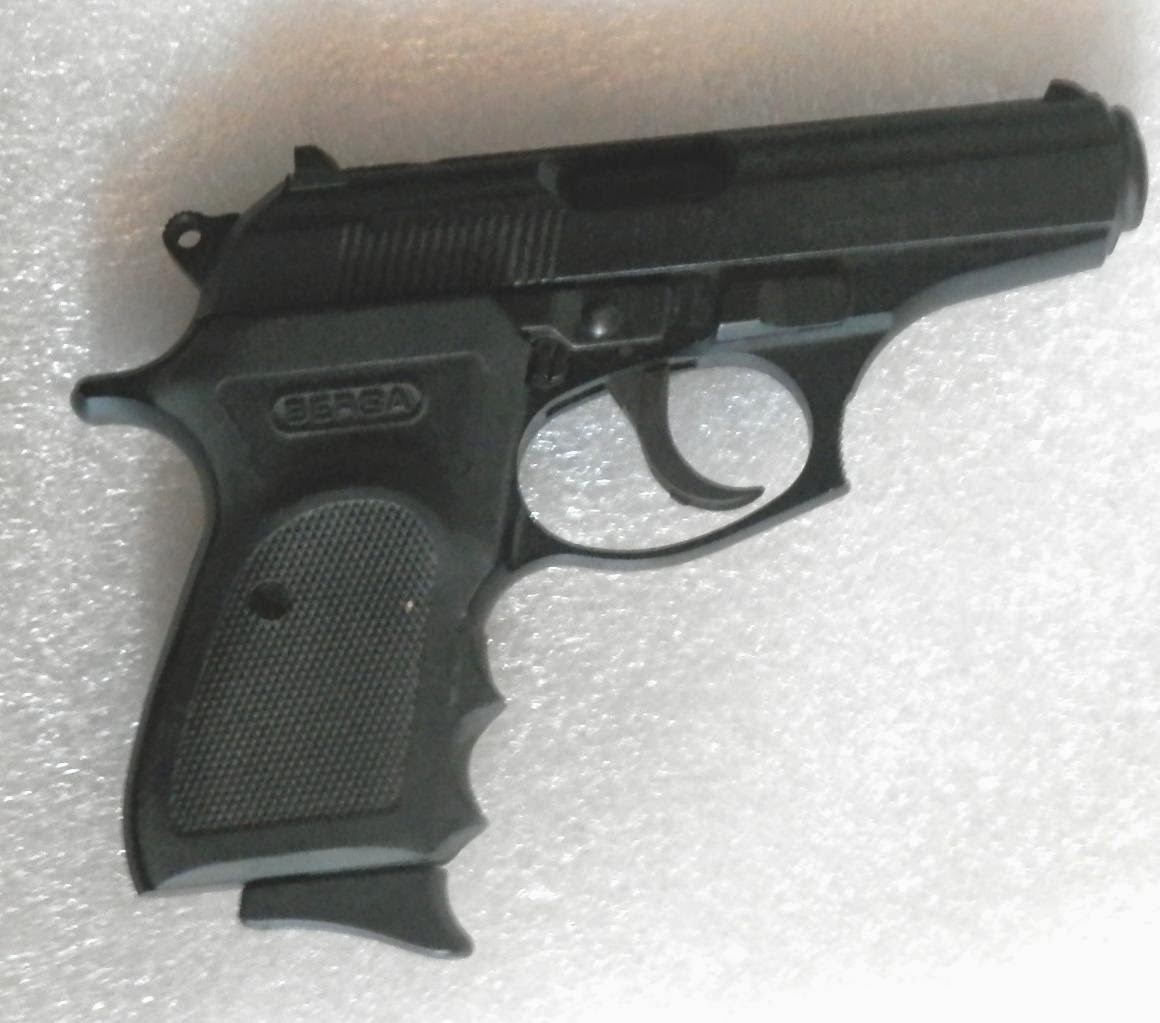 
I've been having problems with the generator's breaker kicking out when the fridge comes on. That's with the AC on, the computer on and the fan on so it was either split the load between the solar and the generator or do without the AC.

To cure that problem I decided to add a separate circuit to allow the fridge to run off of the solar and the AC and everything else to run off of the generator when I want to use the AC. Problem was that I needed another hole in the wall for the other electrical cord. Keep in mind this is just a temporary fix.

I found the drill, but couldn't find a suitable bit for the job so had the brainstorm idea to use the 380 as a drill.

Oh BTW I've also been adding to my vocabulary so might as well use it in describing how I done this.

After carefully calculating the trajectory of the bullet by ignoring the ambiguity of the redundant posture of the trapezoidal triangulus so as not to appear as a dolt I was able to perform the impossible.

Or in redneck lingo I shot a hole through the wall in the cabin after making sure I wasn't going to hit anything outside. 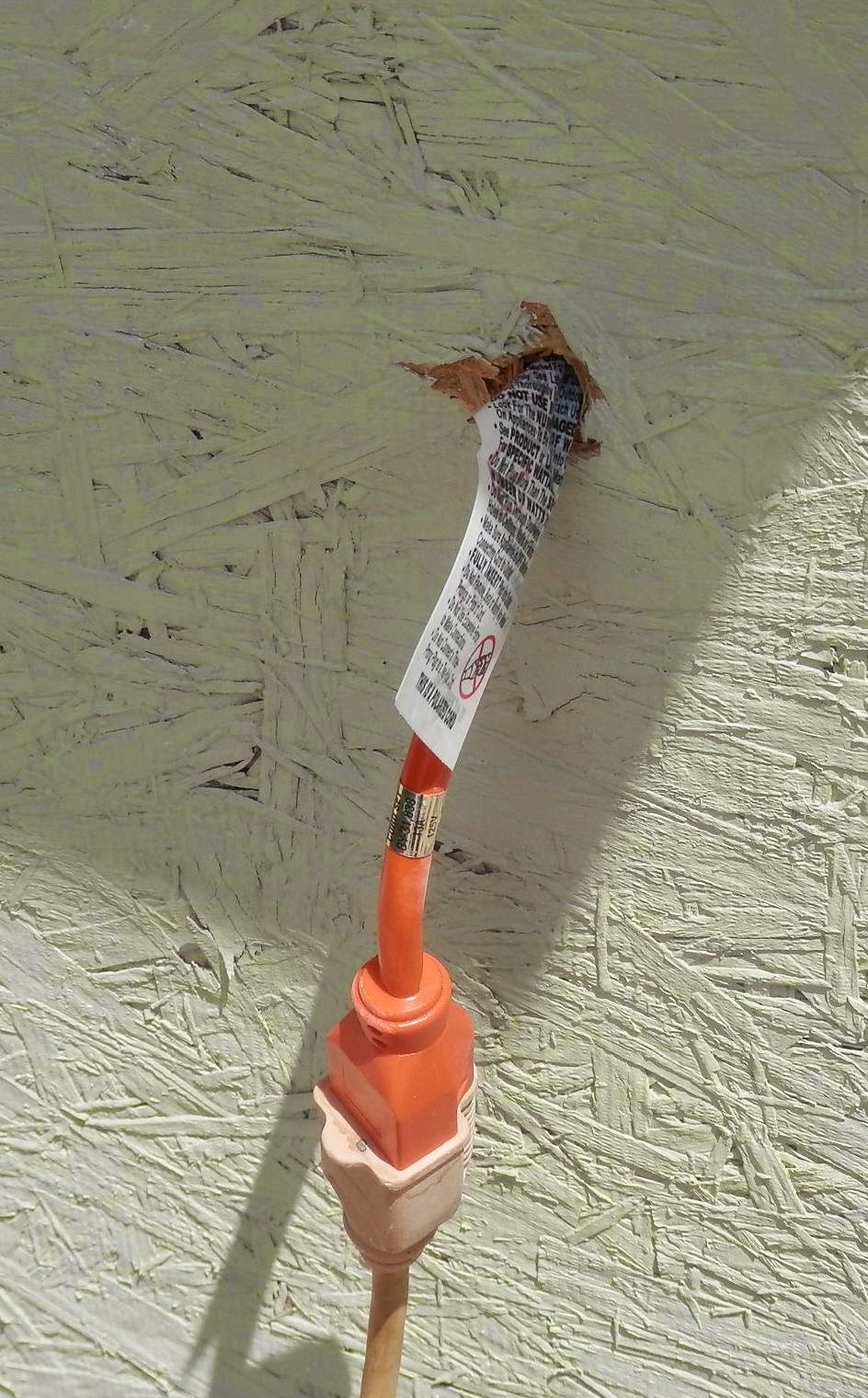 Damn! My ears are still ringing! Now why didn't I wear ear protection??? 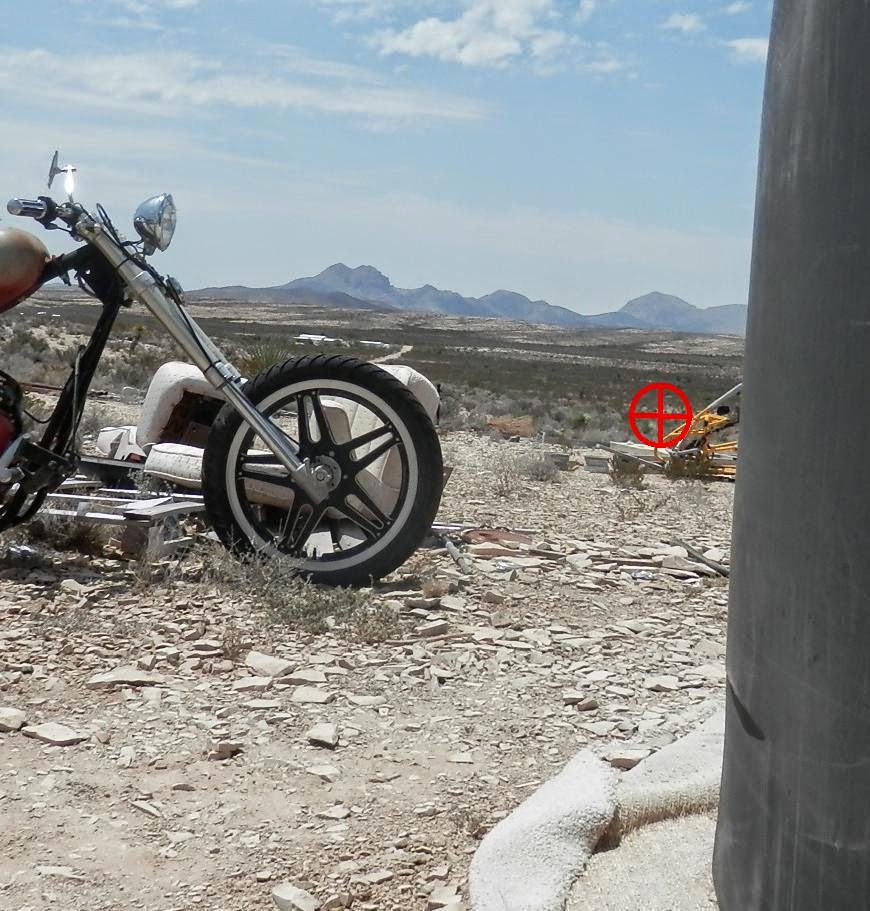 By eyeballing where the hole needed to be inside and eyeballing where the bullet would come out (see red cross hair) I figured I could miss the water tank on the right and the trike front tire on the left. Guess what? No unwanted holes and no neighbor's houses shot up Maw. BTW its 109 degrees here now and 84 in here. The AC sure is nice! 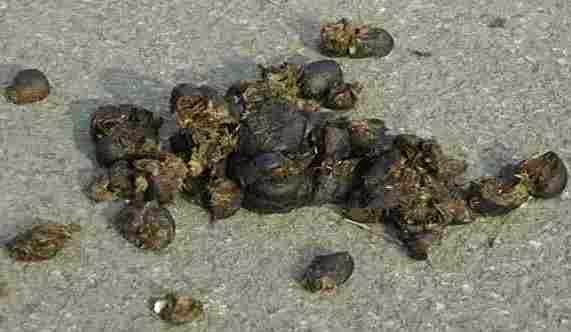 One of the women in this area had hit me up more than once while I was the commander to lease the kitchen in the legion out to her. I know that she also made the same pitch to the commander before me (both declined) and has now evidently made the same pitch to the new commander. Whether or not that part was accepted or not I don't know, but I had also been asked by her if she could put up hitching posts for horses.  On that I told her yes, but only if the hitching posts were out by the fence line away from the building and parking area. There are now hitching post taking up a good bit of the parking area right next to the patio and front of the legion.

I see two major problems with that and the first is that there is already a fly problem in this area and at the legion. The horse shit will likely just attract more and cause even a bigger problem where as if the posts would have been placed where I told her she could put them it might have actually attracted them away from the patio and legion.

Secondly her horse has been known to kick at least one vehicle in the parking lot. Sounds like a liability to me if vehicles are going to be damaged by horses tied right next to them!

Anyway... It may soon be where you can go to the legion and shovel up horse shit for what ever you might need it for. (Check with the current commander though. It may be reserved for something else.) 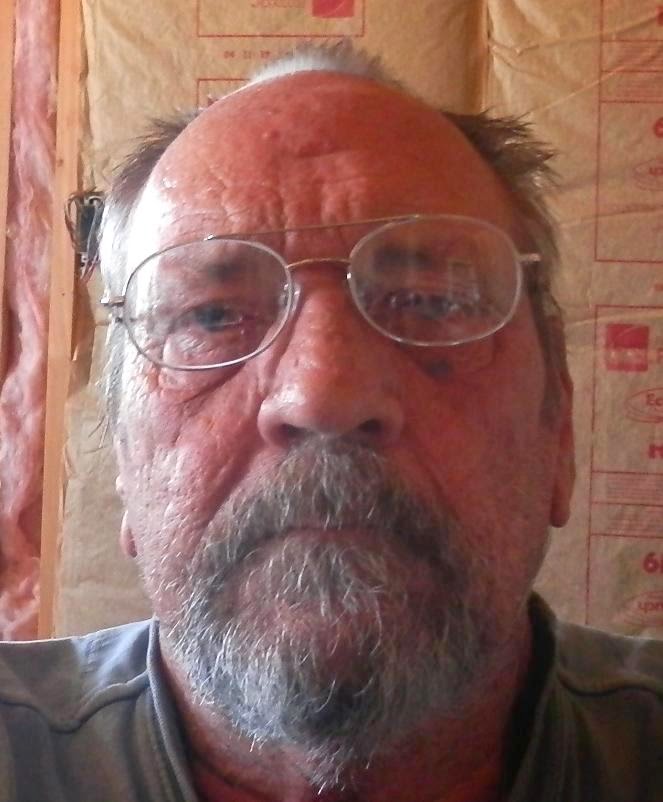 Got the glasses and don't like them at all. First time I put them on it was instant dizzy! As long as I'm using them while I'm driving and looking a distance away they are great, but when I look down at the instrument panel its dizzy again. I made it almost 67 years without needing glasses though so guess I can't complain much. At least when I'm not driving I can get by with out them unless I'm looking at stuff a long way off and want a clear image. 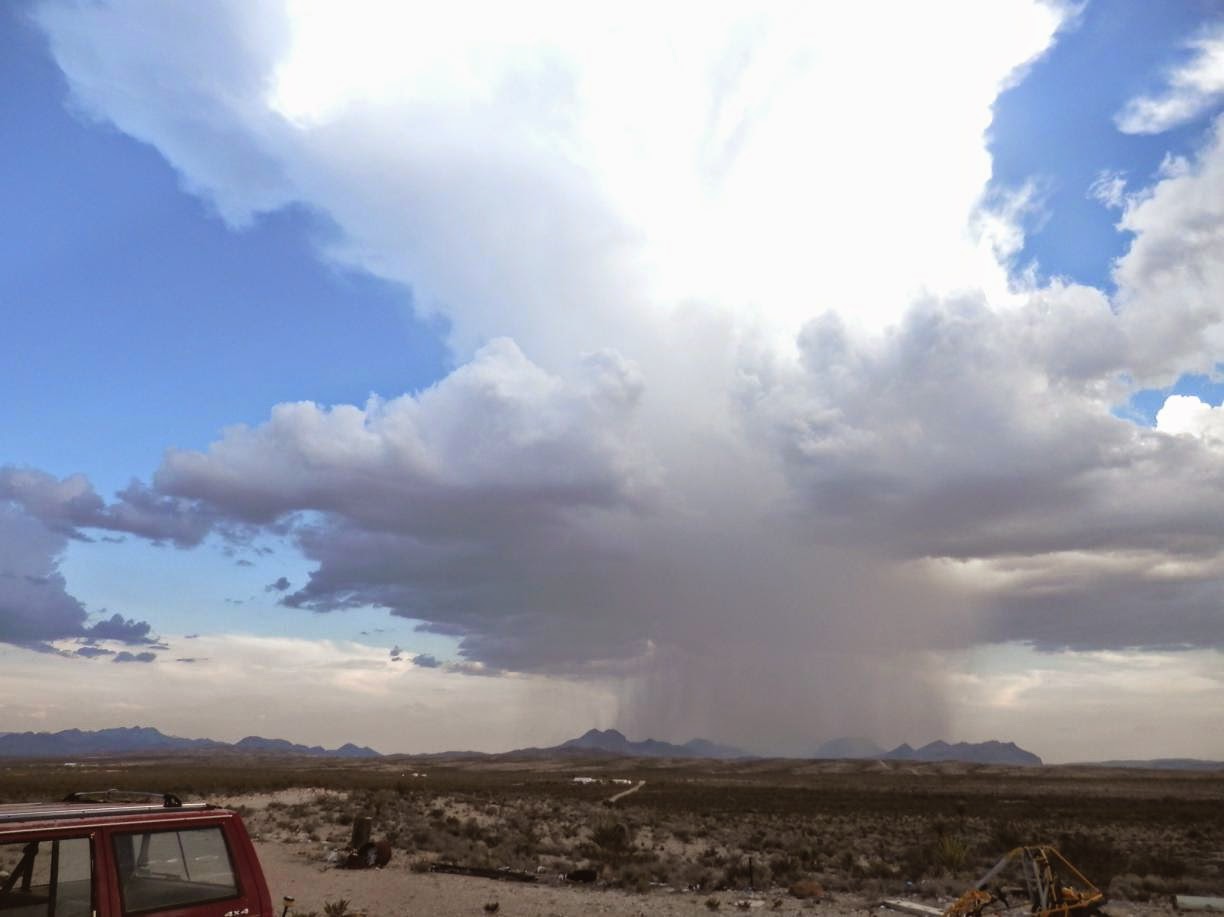 This seems to be the norm now days around here. It can be doing this all the way around here, but nothing here. Sure could use some rain and there's a 70+ % chance next week. A few smaller chances to. All I can do is hope!

Here is what is up with the new bill to allow VETS to get medical care at any place if the waiting time is too long at a VA facility or if you live more than 40 miles away from a VA clinic or hospital. The below is from the American Legion online news letter. Lets see if the law makers can keep the bill screwed up until its forgotten. Grrr!

Today, I want to share with you a joint statement regarding the inappropriate posturing by members of Congress following a request made by Sloan Gibson, acting Secretary of Veterans Affairs. Gibson requested emergency funding of $17.6 billion  to help repair access problems for veterans seeking VA health care.

What follows is a joint statement from myself representing The American Legion, Stewart Hickey, executive director of AMVETS (American Veterans), and Pete Hegseth, chief executive officer of Concerned Veterans for America:

“Regardless of the merits, a last-minute VA request for $17.6 billion dollars in additional spending only hampers an already difficult VA conference committee negotiating process. Both the House and Senate VA reform bills that passed were centered on two things—accountability and access. It is disgraceful and utterly painful to see bipartisan efforts erode and lawmakers lose sight of what’s important. Negotiations, which should happen in public, not behind closed doors, must stay focused on ensuring VA leadership is held accountable and veterans have timely access to care. All other discussions only undermine a critically important process.

“We urge Congress to take immediate action to regain their focus on ensuring the VA Secretary exercises their authority to hold management and staff accountable for their inappropriate behavior, and immediately stop the corruption and mismanagement within the VA. Before asking for more money, the VA must start making good on the nation’s promise to its honored veterans.”


For God and Country,

VA update / Another trip to Odessa / swimming with Jaws 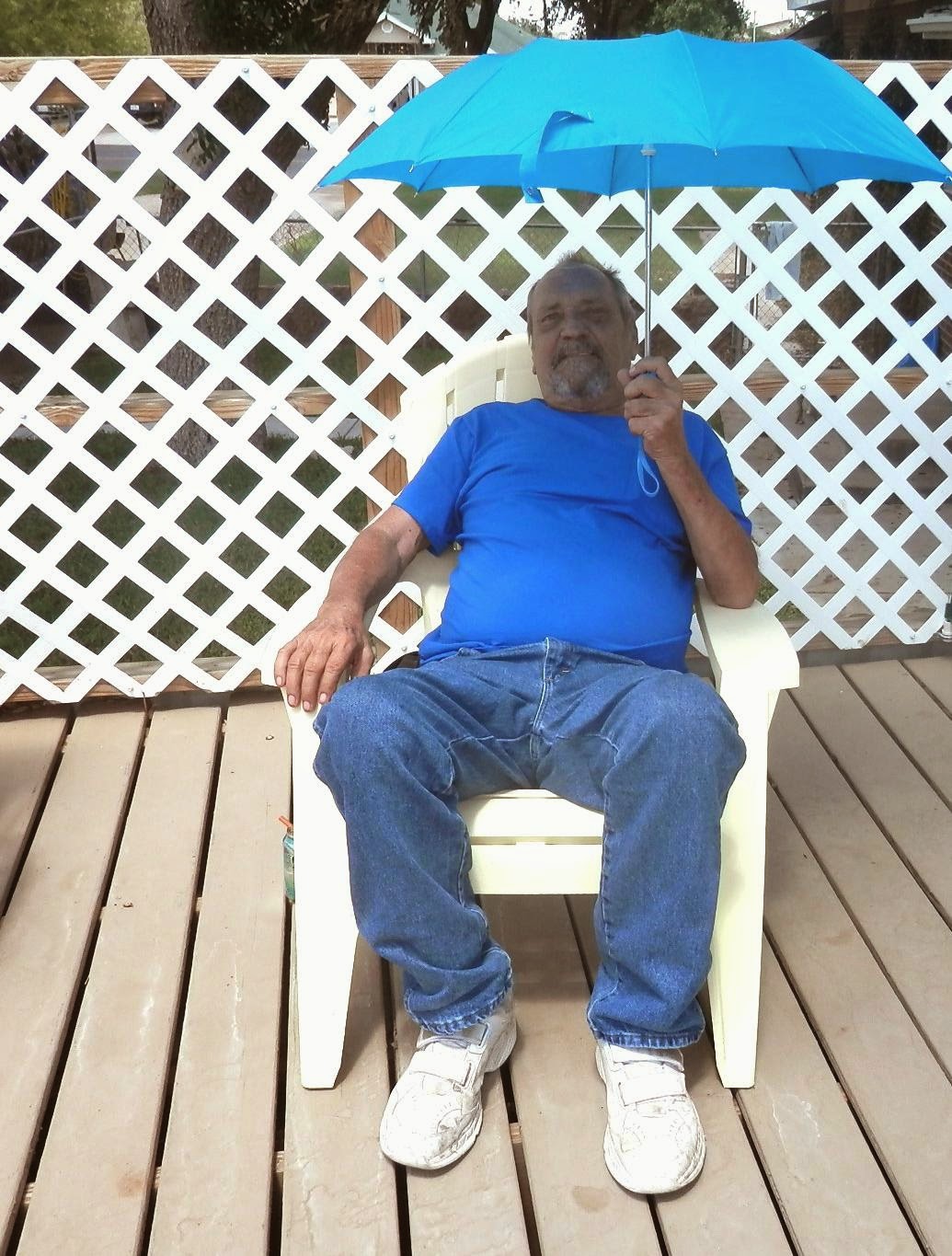 Had to make another trip to Odessa and ultimately to the VA hospital in Big Spring. Had to make that trip twice for different tests. I actually went there to have my eyes checked because my right eye has gotten pretty blurry and its a pain in the rear trying to drive like that. I had to do a lot of walking and standing that first day and as soon as I got to the eye clinic my right leg collapsed and fortunately I was close enough to a seat to make it in it rather than hit the floor. The woman in the eye clinic immediately called emergency services and they sent a wheelchair up for me. The eye exam got put on hold and most of the rest of the day was spent in the x-ray room and waiting on results from them.

Of course the results were the same as what I told them they would be. Bad disc in my lower back (pinched nerves) and a bone graft in my neck that had broken (Also more pinched nerves). I'd had trouble with my right leg going numb and giving me trouble for years, but for some reason after last years blood infection in that leg it has gotten much worse. I'm going to have to go somewhere for an MRI, but as of yet don't have a clue where that is supposed to be. They don't have an MRI at the hospital in Big Spring nor in Odessa at the new mega clinic. They could just send me to a civilian hospital and have it done quick, but the VA is still the VA.

I finally did get to the eye exam and have cataracts in both eyes, but the right one is much worse. The doctor said they weren't bad enough for surgery yet though. I did get a new set of glasses out of the deal though. Or will when they come in the mail. The eye doctor had dilated my eyes and said it would be Ok for me to drive back to Odessa while they were dilated. Humm... First time I've ever heard of that. Anyway the 60 mile trip back to Odessa was a white knuckle experience to say the least since everything was a blur. To make matters worse the traffic on I 20 was every bit as bad as the freeways in the DFW metroplex.

Had to go back last Monday for a blood pressure test on my legs and that was a lot of fun. Sort of like having an anaconda wrapped around your legs crushing them. The nurse did say the torture treatment was over when she got through.

I will have to say that the staff at the hospital were much improved over past visits probably because that is one of the hospitals being under investigation. I actually had a couple of doctors pushing me around in the wheelchair at times. WOW!

Pictures below are at my niece's house and around the pool (which I didn't go in because of not having trunks) and because of Jaws swimming around in there to. ;) Next time I'll remember to take some swimming trunks. 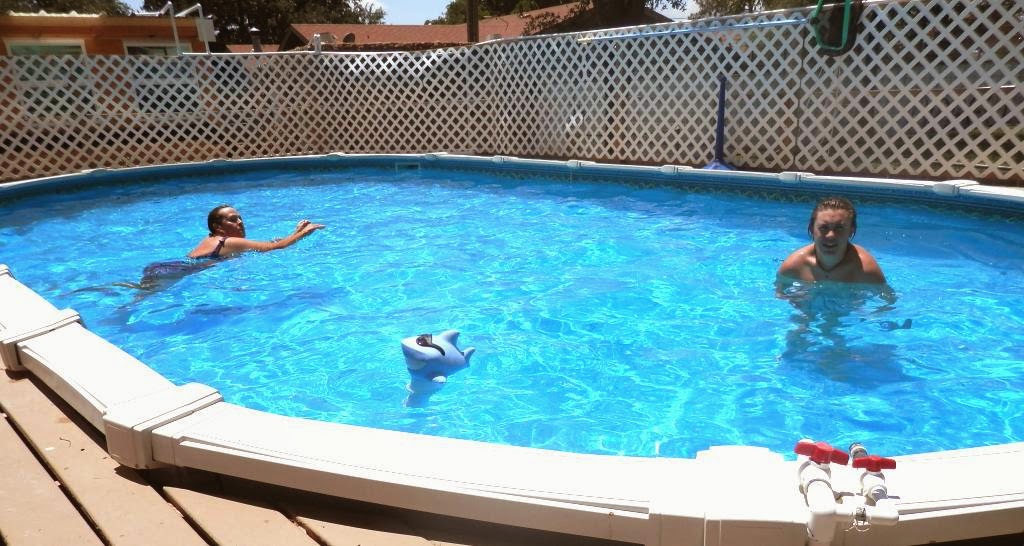 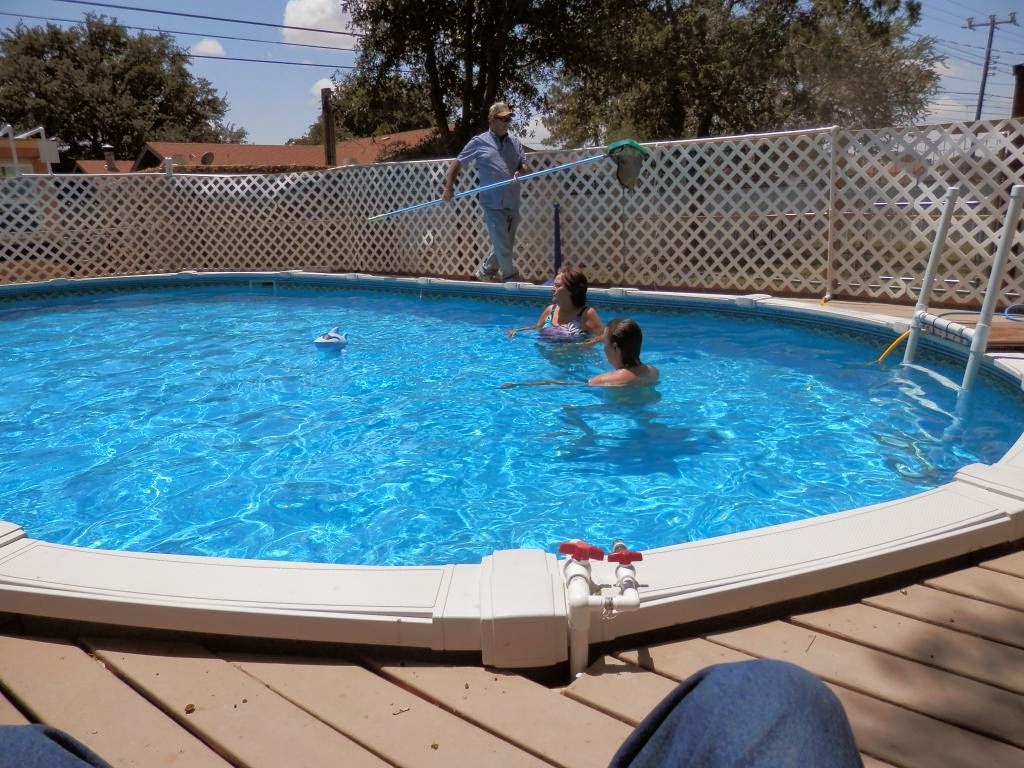 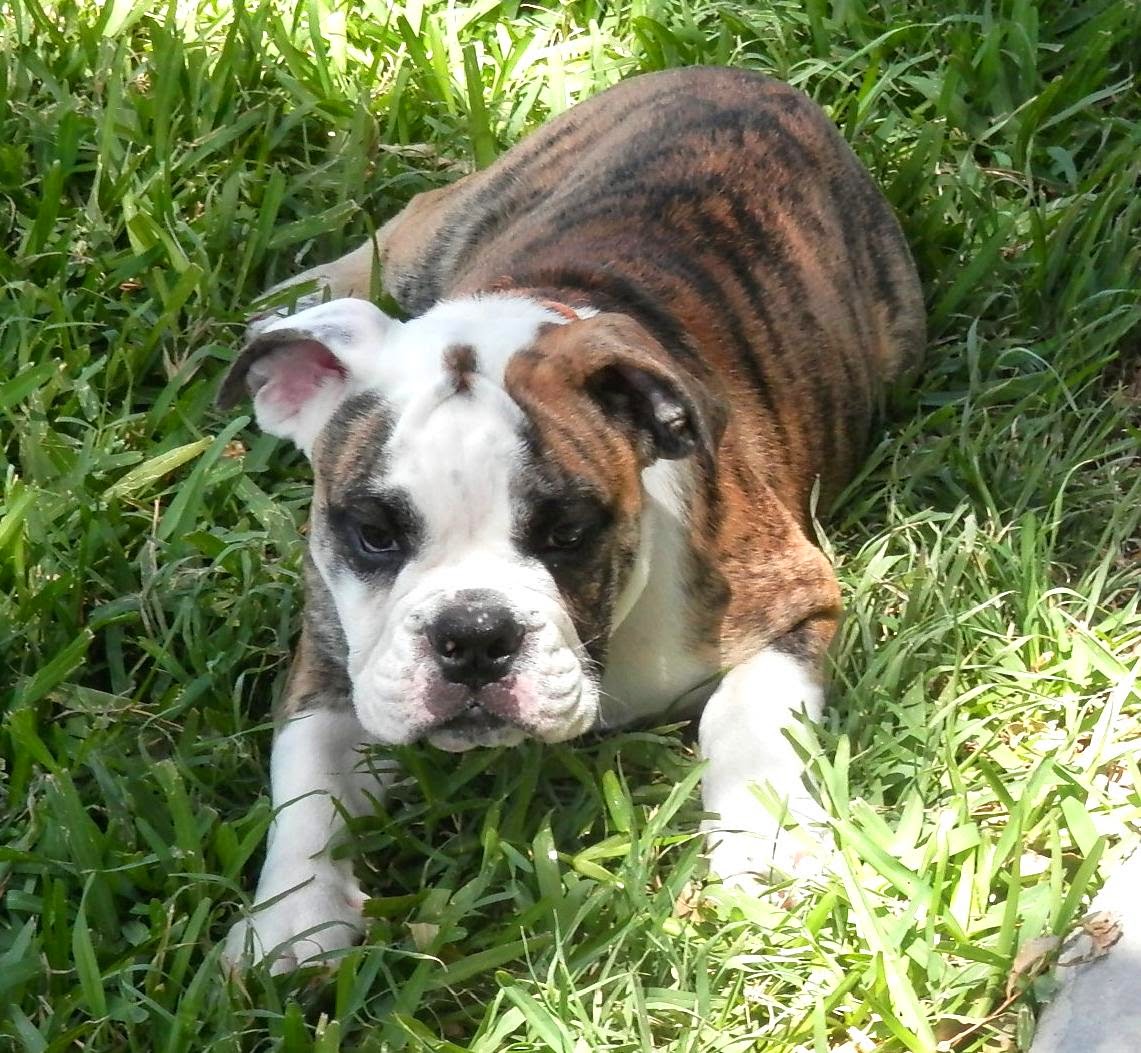 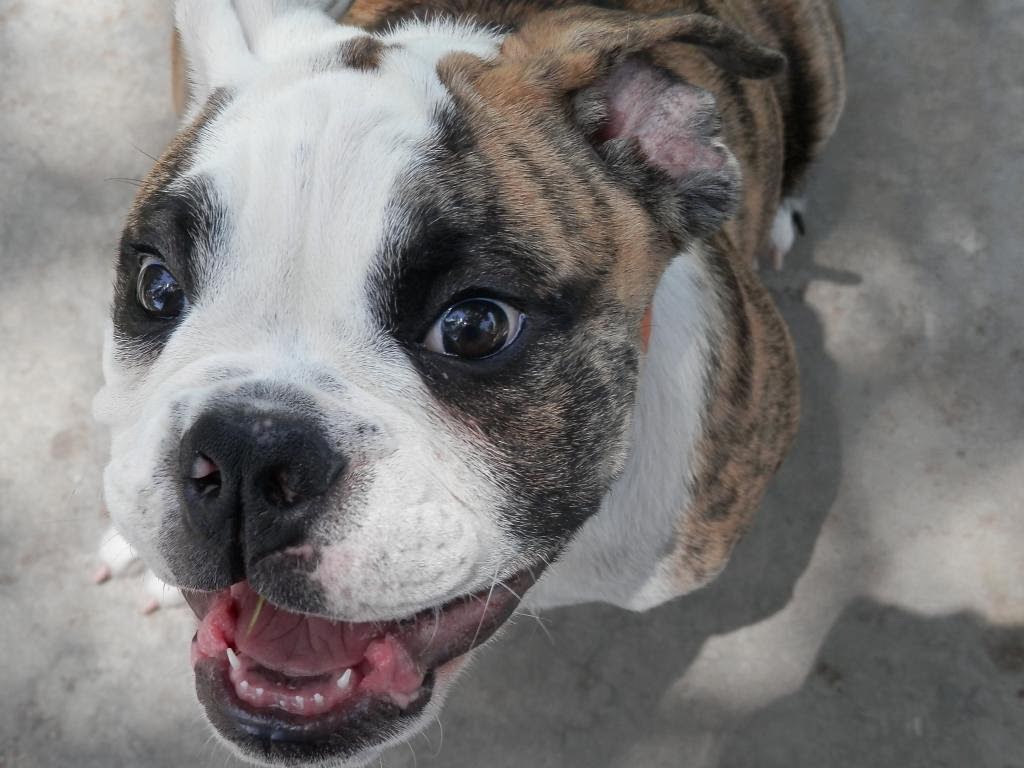 And Jaws swimming in the pool. 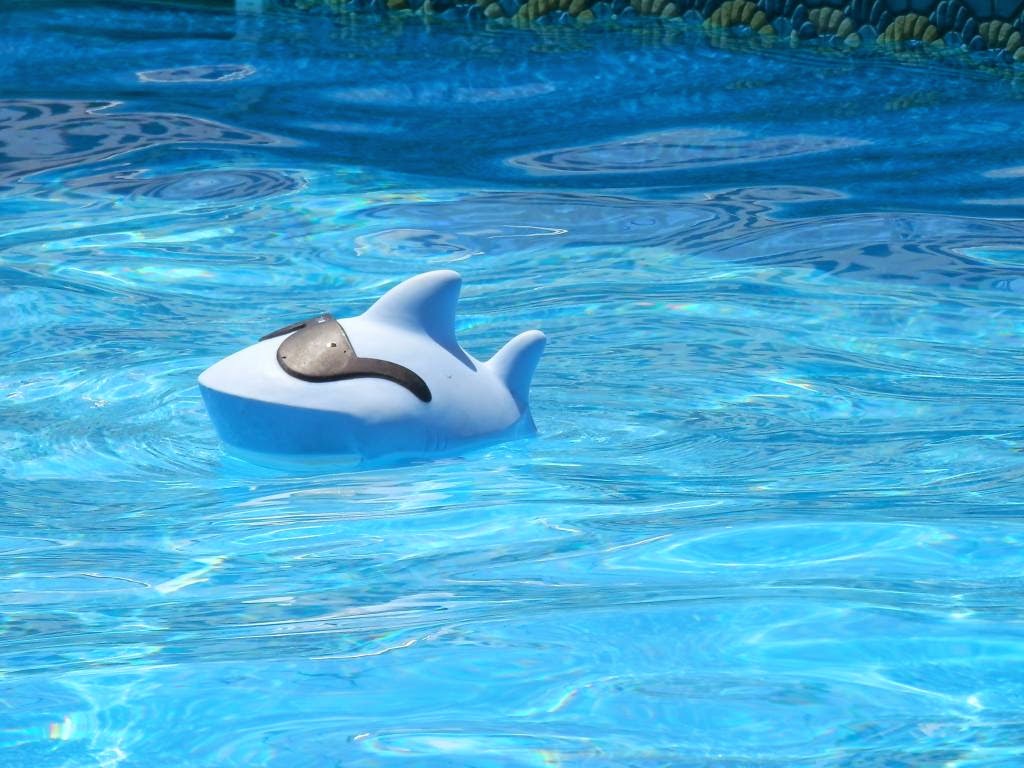 Unbelievable. Well not really. Its the VA what do you expect?.
Posted by tffnguy at 9:47 PM 4 comments: 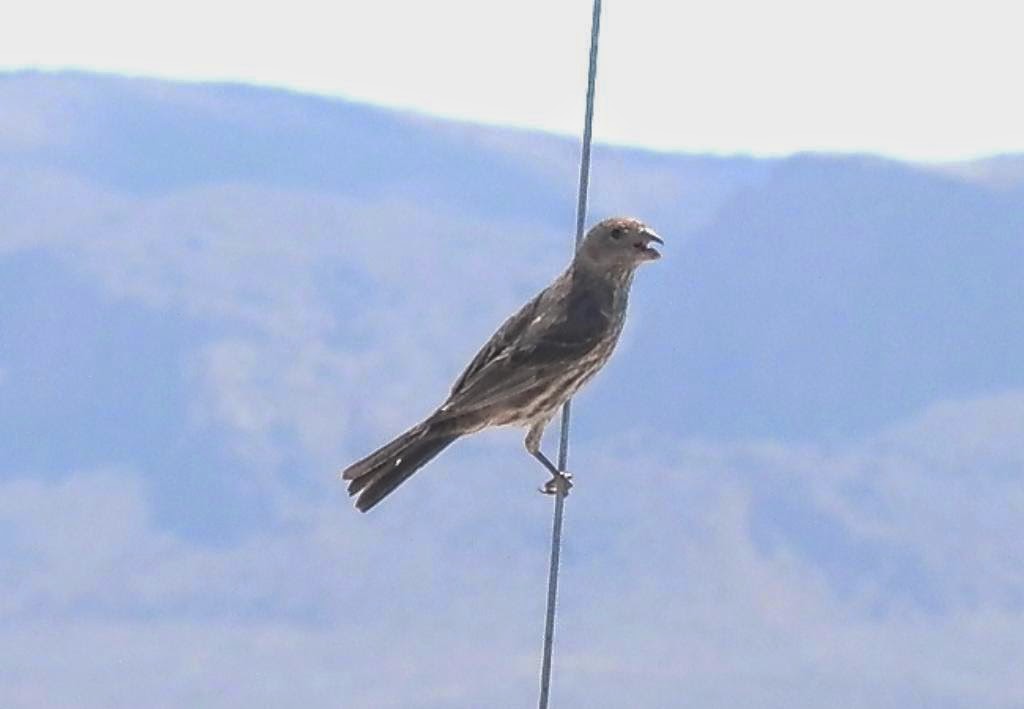 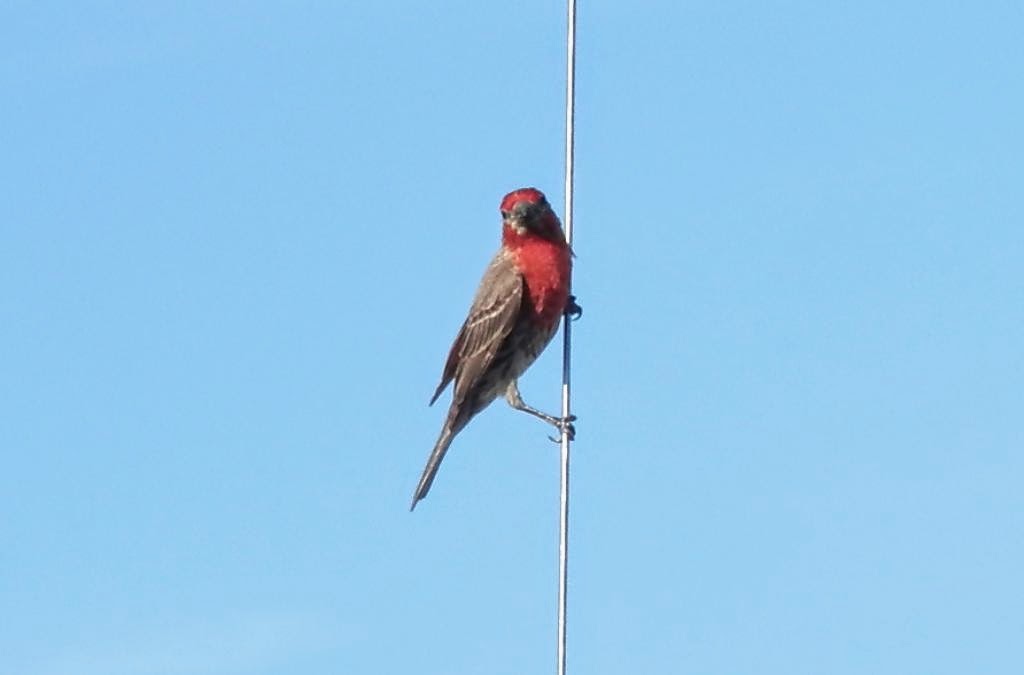 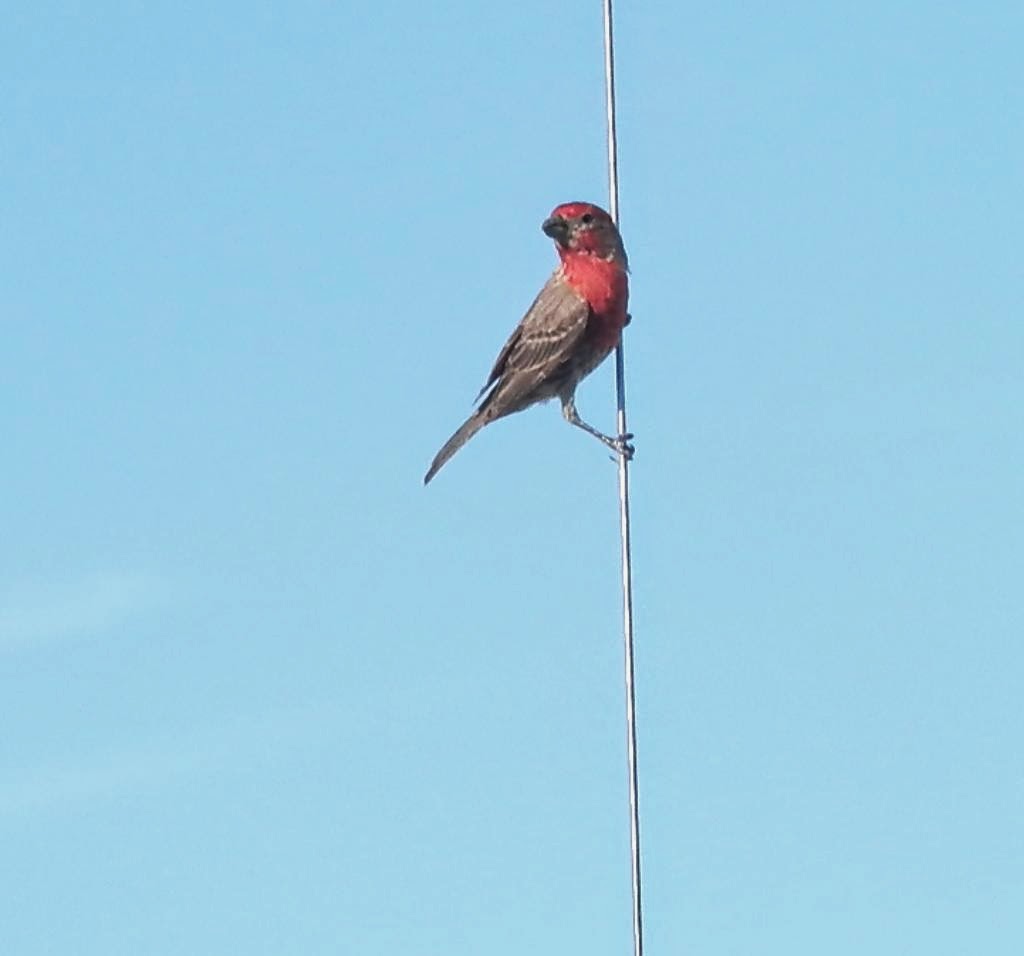 A couple of small birds that hang out here a LOT. They are about the size of sparrows and they are mates. I assume the red headed one is the male. Anyone know what they are?

The Cadillac and where I got it? 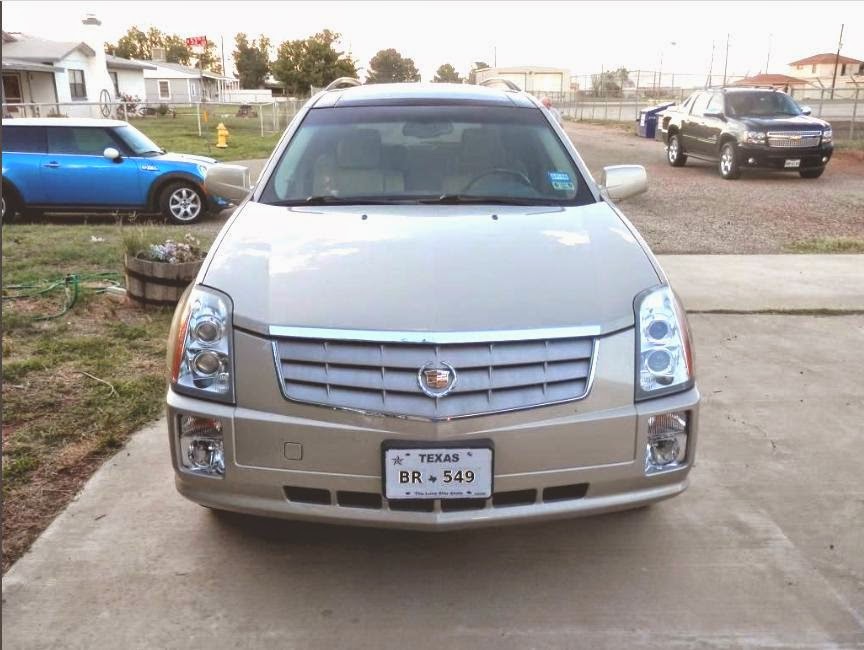 I'm not much on Bull Shitting, but do it every now and then for fun. I think we all do it? I generally fess up real quick though. I guess its about time to fess up on the Cadillac since it doesn't belong to me. Haven't heard of any new rumors of how I came by it yet (probably because of my other post) I didn't buy it, steal it, rent it or anything else. Its a loaner! Just wanted to see what kind of rumors came up before I fessed up.

The car belongs to my niece Madeleine and she was kind enough to loan it to me for a while while I try to get my health straightened out through the VA. The Jeep is about ready for the junk yard and taking it on long distance trips to the VA facilities is a crap shoot at the least. Mater of fact I've been pretty well Exiled to Terlingua (name of a song I wrote some time back.) Anyway I've been pretty well stuck down here for well over a year and a half because of worrying about breakdowns even just going to Alpine and back for supplies. There aren't any VA facilities there anyway and taking it to Odessa was not a fun idea at all!

Not to worry Madaleine isn't having to ride a bicycle or anything like that. She has a newer one now and isn't ready to sell the loaner yet.

Not being able to get to the VA for appointments has taken its toll on me and truth be known I'm about ready for the human junk yard to. Not sure if its too late to get my health back or not, but I'd guess it is.

So there you have it.

Now the big problem will be getting the VA to do anything for me!
Posted by tffnguy at 11:36 AM 28 comments: 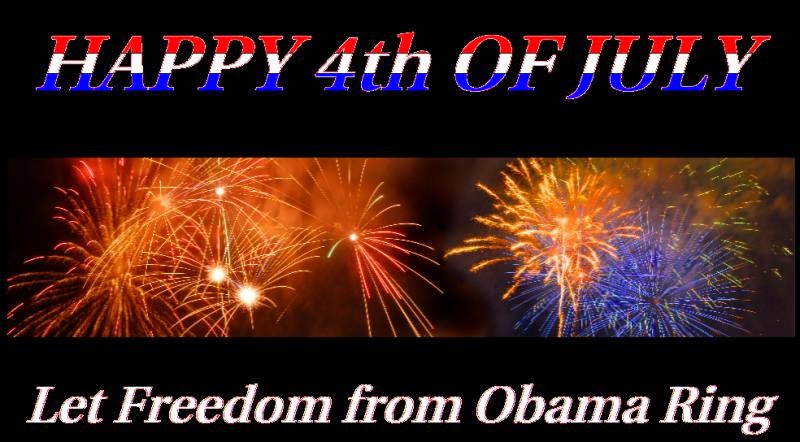