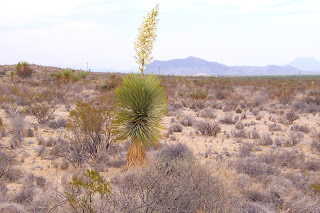 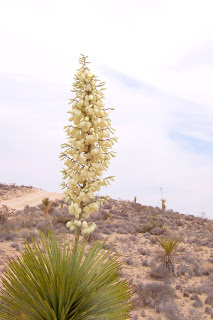 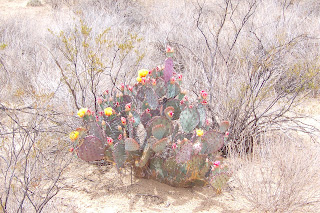 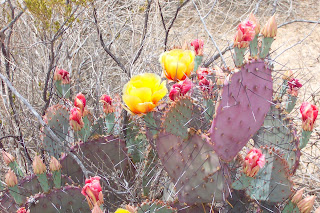 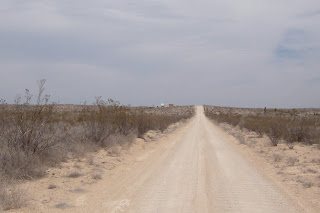 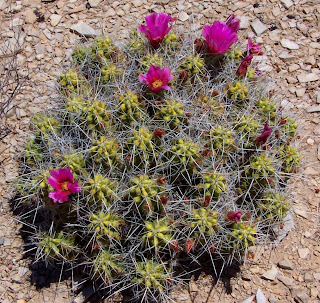 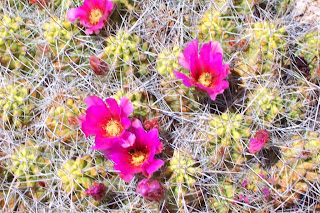 Finally some beauty in this desert. Unfortunately these are only down hill from here and nothing like this up here where the cabin is. That is except for the strawberry cactus which is blooming, but the fruit looks like it will be too small to eat. Looks like its about time for more yucca flower stir fry. I plan to try pickling some of the Yucca fruit this year. I'm hoping that will offset the mild bitter taste.

Currently its sprinkling off and on, but probably no measurable amount. The roof on the cabin is doing well even though it isn't sealed yet.
Posted by tffnguy at 5:13 PM 27 comments:

Been in Odessa from last Thursday until yesterday and getting back here was HELL. I'd gotten used to sleeping in air conditioned comfort and in a real comfortable bed. When I got back here it was 100 degrees and very little wind. Its supposed to be hotter today according to Nick. It was after midnight before it cooled down in here enough to sleep. To add insult to injury there is a really bad fly problem area wide down here and they are the real pesky type!

I should be getting one of the grant septic systems before long so need to add a bathroom to the cabin. Will be nice to have indoor plumbing, but it will mean getting more watter hauled. I now have enough solar to run a small refrigerated AC in the cabin during the days when it is finished. That will be awful nice to.

The arm is doing so so. Gives me a lot of pain at times and feels pretty good at others. Got about 3 1/2 more weeks to wear the damn cast. Hopefully by then if there is problems I'll be back in the VA system so they can deal with it??? I sent the last paper work off yesterday.

In other news the Grub Shack has been sold now that its operational again. Jerry and Eva are moving out of the area. Looks like the GS is in good hands though and the food is still great. Its also open 6 days a week instead of 5.

The Legion is now closed Tuesdays and Wednesdays until the end of summer, but at least it and the GS both sell ice and at least one will be open where we can get ice 7 days a week without having to drive all the way to Study Butte.

For someone exiled to Terlingua.

And if that video is down try this link. A thousand miles to nowhere. 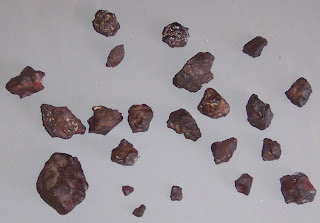 Found a few more meteor fragments this morning. I didn't know what they were before Leon and Brandon told me. I'd picked up some of the fragments before, but not knowing what the were and other than noticing they were way heavy for the size I just tossed them. I won't do that again. So far the largest I've found is about the size of a peach pit.
Posted by tffnguy at 1:58 PM 17 comments: 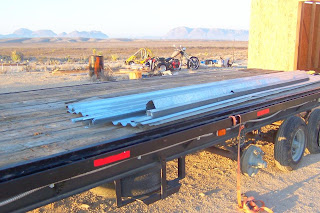 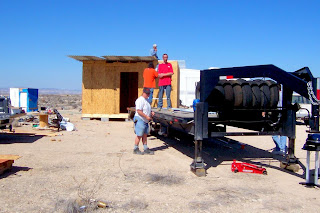 Part of the Roofing crew (All friends and neighbors.) 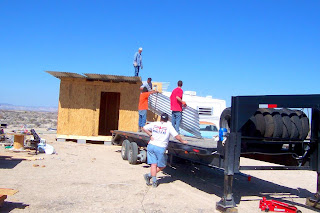 A sheet of tin going up. Robert my nearest neighbor standing on the roof and he screwed most of the metal down. 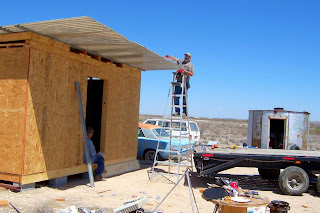 Leon working on securing the roof. 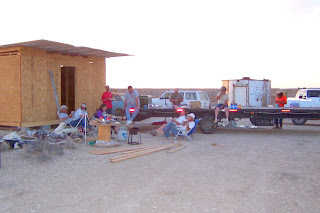 After work Party. Lots of food and drink furnished by Leon and other friends. 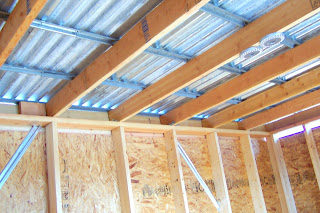 Inside after finished. I'll post more info when I feel better.
Posted by tffnguy at 10:52 AM 17 comments:

Basically like my arm is broken. the bottom bone is broken and the top is not. (This is not my x-ray) Evidently in my tossing and turning last night it broke loose again and my arm and hand are swelling again. Don't know what I'm going to do now, but going back to the ER isn't one of them.

I'm also blowing the lining to my nose out through my left nostril, but that started a couple of weeks ago. The good doc that set my arm looked up both nostrils with his nifty little flashlight thingie after finishing with my arm and said the left one was redder than the right, but didn't prescribe anything or otherwise speculate on it. I think where the tissue is coming from is further up than he can see with that.

Its turned in to the rainy season in Terlingua according to my neighbor Robert and Dave the legion manager so since I can't be working on the cabin I guess that will go to pot because it isn't dried in.

The VA conveniently lost me out of their system and are dragging their feet about getting me back in it so I can't rely on the VA for medical help until that's done.

I'm starting to think a one way trip to the Devil's Playground might be the best thing.
Posted by tffnguy at 1:02 PM 30 comments: 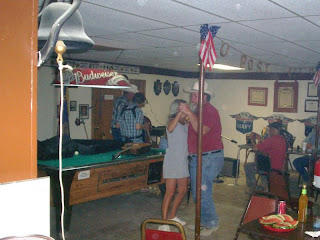 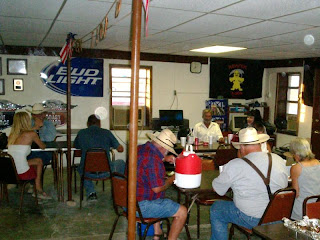 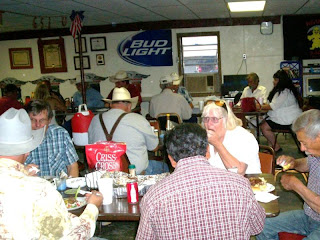 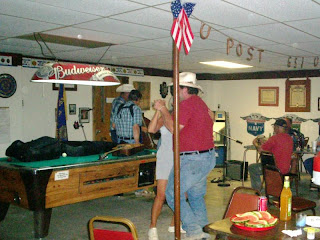 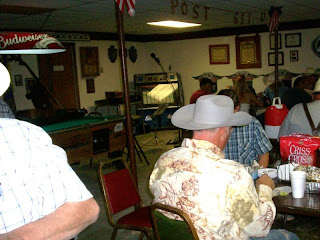 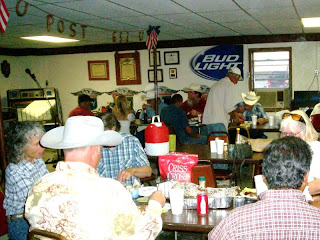 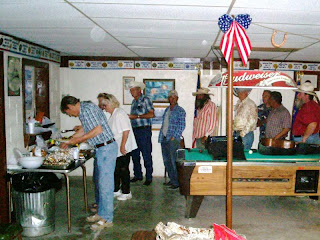 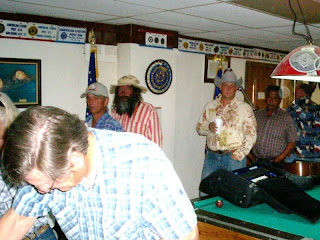 The Legion held a going away party for a good patron and friend Dennis last night. It turned out to be a hell of a party and there was more food than could be eaten. Lee provided plenty of BBQ and a number of other people brought food. Entertainment was also provided by others. There was also more tomahawk and knife throwing thanks to Dennis.  There was desert there to die for and I was so stuffed by the time I finished eating that I had to switch from beer to whiskey because there just wasn't room for any more beer!

BTW Dennis is what us locals call Snow Birds because he and the others winter down here and they are smart enough to get the hell out of Dodge / Terlingua before the heat of the summer hits. We (Us locals) always hate to see out good friends and Snow Birds leave. Things just aren't the same until they return around Fall. Hopefully over time most of them will move here full time.

All photos by David Secor. I forgot my camera.
Posted by tffnguy at 12:39 PM 18 comments: