Below is the document Alex had composed just prior to his death in regard to false accusations about him by the commander of the legion and others involved with it. Needless to say he couldn't use the Legion's printer (which he had donated to the legion) because he had been banned from the legion by the commander. Therefore, he had been to several people in the area to see if they could print it for him. Although he never (as far as I know) had a chance to sign the document before his death there are plenty of witness to prove that he did author the document. At least five or more of his friends were given the digital documents by him. 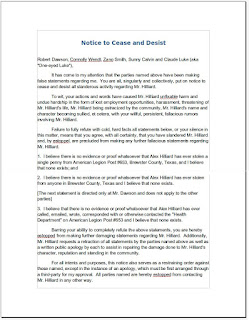 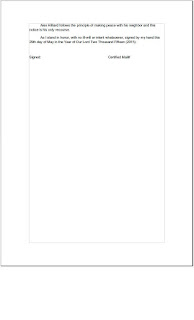 With all the rumors and BS going around after Alex' death it has been real hard trying to sift through all of it to try and find out exactly what happened. The fact that the Sheriff's department has been pretty tight lipped about the whole thing hasn't helped although I was told by one deputy that there will be a meeting to try and dispel all the rumors and let the truth be known. I have been out of the area with medical problems so I can't say for sure whether this has already happened or is still pending? I'd been holding off on this blog post waiting for that, but I have gotten tired of waiting. The problem with this meeting is that it was supposed to be at the legion and most people that I know refused to go there for it and wanted it moved to some other place. I my self have little desire to go there to.

Back a few days before the last election for officers at the legion I posted a thread on Facebook (Our Terlingua). In that thread I did all but beg any members in the area to show up at that election and vote, but unfortunately it didn't happen. One of the officers at the time wasn't even able to be there because of being out of the area for medical appointments. For that reason he should have been included in the election as that post officer again. No one ran for his post anyway, but that was what the commander intended since he was planning to get reelected as commander again come hell or high water. In other words he had the deck stacked in his favor and wanted to keep it that way. There were not enough members there to prevent it so now we have a dysfunctional legion as far as it being a BIG community support group for any and ALL locals to go. (As it was for many years.)

In the thread I mentioned above the commander's wife was sitting outside during the next meeting along with a good number of other people who were not allowed to vote to keep the legion as it has always been. It was decided by the few officers that had (in my opinion) stolen the election the month before. Anyway I made the comment to several people there that her husband was wearing a Vietnam Vet cap and was not a Vietnam vet. (Fact) The commanders wife went ballistic and stormed over to the table where we were sitting, slammed her fists on the table (which startled everyone at the table to the point that they nearly jumped out of their chairs.) That included me. She said that her husband was a Vietnam vet and I said "No he isn't" She then said You had better quit lying about my husband." Oh really... Since when is the truth a lie? All I said to her after that was "I'm not going to argue with you." Three times as she kept up ranting. Next thing I know she had gone inside to tell a totally different story evidently because one of the people in the meeting came out and told me that they had called the Sheriff's department and were going to ban me and have me thrown in jail for VERBALLY ASSAULTING A WOMAN??? You've got to be kidding! They did ban me from the legion despite the fact that that didn't happen and there were plenty of witnessed to prove it. They also banned several customers, employees and ex employees including Alex, Karen and a number of others for no reason at all.

Below is the response from the commander's wife to my post trying to get members to show up to the election and my response to hers.

===
Lynnette Dawson 7:20pm May 4
Save the Legion? David Smith has done nothing but try to destroy the Legion for the last three years. Before District came and took the Commander-ship from him he told all the locals the Legion was closing he was giving all the beer and food away with a big party. He was not even going to renew the beer licence. Then after the last election he is telling all the Locals not to come to the Legion and to not support them. The Legion is going to survive and it has a lot of good people in position to make a difference.

My reply:
Ok... Time to shoot holes in all of above bullshit lies and Defamation of my character. First off I have not been trying to destroy the legion for the last three years! I have been heavily supporting it for the past six years. It was doing fine while I was the commander. Put the blame where it belongs. District came and did the usual CHANGE OF COMMAND and it was NOT two months early it was two weeks early. Never the less it was still the normal change of command ceremony. The sheriff's department had nothing to do with it. Patric was there (Probably at the request of a very insecure person), but the only conversation he and I had was about a young lady that had been living in the desert in her car and was dangerously close to dying from the heat. He told me they had to escort her out of the area. My reply was "Good she didn't belong here and would have died here." Now I was stepping down as commander and it was up to the next commander to take care of anything coming up that would effect his command. (Including renewing the beer license, the Non Profit organization status and so on. Don't be blaming that on me! I did NOT give away all of the beer and food. I didn't even have a party. The bar tender quit and walked out which left some customers in there that weren't ready to leave. I did give away three pizzas (Shared by the customers) and maybe a case of beer to the customers that were still there before closing it down. I was still the commander at the time and that was an executive decision to keep from pissing off customers. I've seen a lot worse executive decisions lately and if the legion shuts down I won't be responsible for it. I haven't been the commander in over a year. As far as me telling people not to go there? More BS. IF I told anyone not to go there they would probably do it to spite me.
===

Now after I made my reply her reply to my thread mysteriously disappeared, but Hey! You know it was on the internet and once you post something you can't take it back. That was actually a quote in an email I got through Facebook. I also have the digital from showing that it was posted there (Which I put back where it couldn't be deleted.)

Now... With all of this said I am calling for the resignation of ALL current officers of American Legion post 653  and a new election to be held with different (HOPEFULLY) reputable members to once again restore the legion to what it has been. (A place of support for the community and not an embarrassment to it.)

That's it for now Folks.