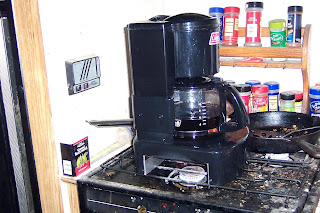 I just got back from spending a week in Odessa with my family and yesterday when I stopped by the legion to get ice before coming home Dave handed me a box that was sent to me by The Foots. Its a Coleman camping coffee maker that works like an electric, but it doesn't use electricity. That's good because most of the electric coffee makers draw about 1500 watts and even if you have some solar you about have to run those coffee makers off of a generator. This one just sits over a burner and works like an electric one. Its slower than electric, but not bad. Took about 20 minutes to make 10 cups. Thanks Bigfoot & Littlefoot! 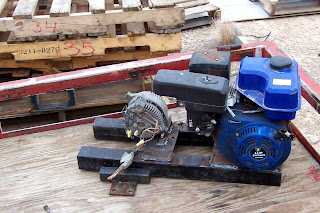 I took some iron, the alternator and new motor to Odessa and Ring and I constructed this new charger there. Unfortunately we didn't get 100% finished so I can't use it to charge the batteries on cloudy days. I could sure use it today because it is cloudy and there's a 30% chance of snow tonight. BTW when I got home yesterday it was sunny and was actually T-Shirt weather until the sun started setting. I guess I should have finished the charger then, but was busy doing other things. Now its too damned cold and windy to do it so I may have to try and get the jeep up next to the battery hut if I have to recharge them because of lack of sun. The propane bottle I was using ran out in the wee hours of the morning so it was pretty darned cold getting out of the rack this morning. Fortunately I only had to switch from the empty bottle to a full one. The oven isn't cutting the mustard too well in here because the temp is dropping, but hopefully not below 55 degrees or so which I can handle.

Did I say its COLD here? Online says its 40 degrees, but the thermometer in the It'll Du said it was 31 degrees over an hour ago and I think the temp is actually dropping. I'd put the wind at about 25 MPH and gusting to about 40. There's a 30% chance of SNOW tonight. Tell me it isn't true! I hate that stuff!!! 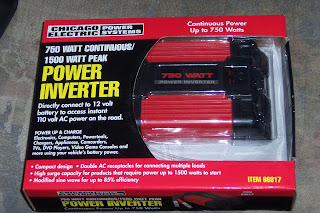 While in Odessa I managed to pick up this 750/1500 inverter at Harbor Freight. Ring had a coupon for $35 for it and I think that was about half price. That should open up the way to running a fridge if I ever get one. My neighbor's new fridge has a defrost cycle on it that is a real watt hog so he is going to have to keep the one he was going to give to me. Looked like Bigfoot was going to be able to get me one, but that fell through so now I'm back to square one on that. My other neighbor still has the one he wanted to sell me, but he got burned on the price of it and wants the same amount if he sells it to me. Its pretty  rough and $300 which is about $200 more than I'd pay so I'll keep looking. 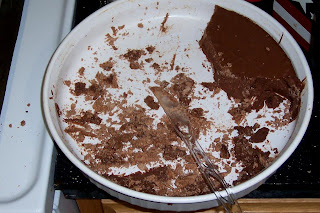 And finally what's left of a batch of BlackJack Fudge I made while in Odessa. Needless to say it went over big. Its a real easy  recipe and probably doesn't take over about 10 minutes to make. Consists of a 2 pound bag of powdered sugar, 1 pound pack of semi sweet chocolate chips and 8 Oz of Black Jack or your favorite bourbon. You mix the powdered sugar and bourbon well and then heat the chocolate chips in a microwave until they are melted and then mix that with the sugar booze mixture and pour it in a greased pan of some type. A 9x12 works out about right and it sure is good. Especially with pecans in it, but Misty is allergic to them so I had to leave them out of this batch. 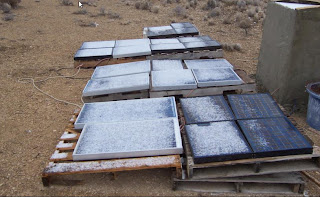 Update... Its been snowing here some over the night and this morning. Had to get out and sweep the snow off the solar panels because they weren't charging at all. At least now they are a little. Technically the inverter should have shut down because the voltage was down to 11.39. I thought the inverter I am using cut out at 11.5, but I guess it is 11 instead. Looks like if I want power tonight I'm going to have to grub up some creosote where I can get the jeep to the battery hut to charge the batteries or bring the charger in here and try to get it finished where I can use it instead.

BTW for you who are or will be relying on solar keep in mind I'd have to have setup a ladder and gotten on a roof if they were roof mounted. Having the panels close to the ground is a BIG benefit at most times. (Easy to get to to keep them clean)
Posted by tffnguy at 2:09 PM