One of my friends (Hollywood) was over here a couple of days ago and I'd never shown him around this property before so I did. With in about a minute he had found the stuff below. 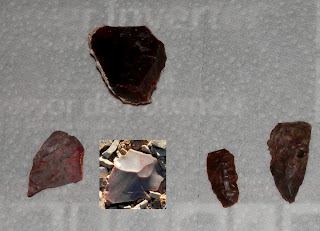 He is pretty much a historian for this area and mighty good at finding artefacts. I'd been by where he found the goodies quiet a few times and had never found them before. Now that I know what to look for I hope to find a bunch. 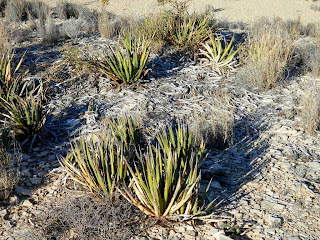 He also pointed out the plants in the picture above and said they are not from this area and were more than likely planted by the indians since they used them for a number of different things. I'd seen them many times and thought they  were small Yuccas, but that isn't the case. They are all located in a small plot and he said they were planted there. He showed me a few other cactus and other plants that are not supposed to be here and were probably planted here by the indians. I'd always though with the view of the valley below most of the way around that the indians may have camped up here. Looks like I was right.

He also pointed out the way this land it terraced and said there was probably some farming going on here back when. No telling what the desert grass is hiding since it could have grown up over other artefacts. 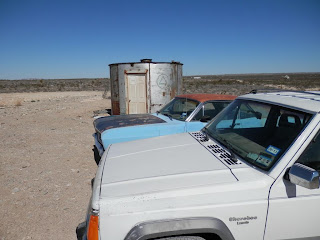 I cranked up the Falcon yesterday for the first time in months. I took it for a drive down to the Legion since some of the newer people here have never seen it running.  For that matter some have never seen it period. I was surprised that it even started, but the old gal fired right up. Of course I have had a small solar panel connected to the battery to keep it hot, but the gas has to be going south because of age. Its been in there every since I got the Jeep. I put another can of stop leak in the rear tire that keeps going down, but that wasn't enough to air it completely up. The generator wouldn't start, but the big inverter running off of solar and batteries ran the compressor fine. I guess I need to clean the sparkplug on the generator though.
Posted by tffnguy at 12:41 PM