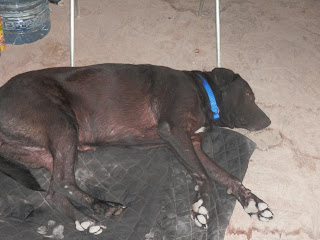 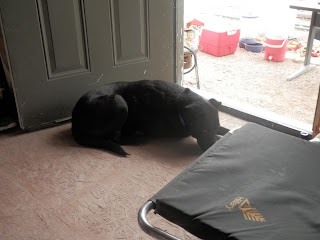 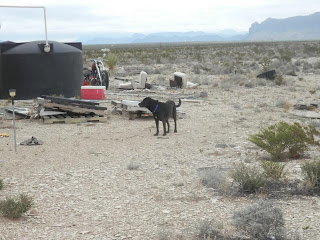 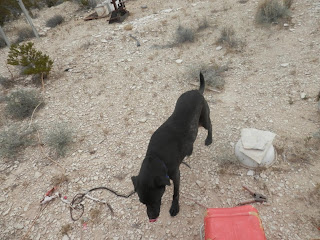 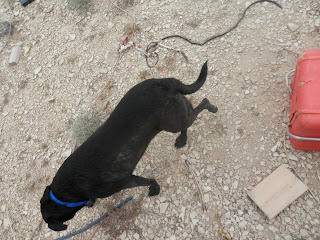 We're getting along fine so far. She does like to be petted a lot more than I have time to devote to that so I guess she'll just have to deal with that. She got on an exploring kick yesterday and at first I could call her and she would come back from where she was, but later got to where she wouldn't. It was windy and she was out of sight though so she may not have been able to hear me calling her. One time I cranked up the Jeep and took off down 118 looking for her and when I came back she was running down my road back to the cabin and stopped in front of the cabin and waited for me. After that when she wouldn't come when I'd call her I decided to crank up the jeep and as soon as I did she came running. She likes to ride which is a good thing for me. She likes to be in the Jeep to so that makes it nice because I can leave her in there with the windows down when I go to the store or what ever and she won't jump out. As a matter of fact I have to almost drag her out.

Earlier this morning it was sprinkling and coming in the door so I shut the door and then kept getting pestered by flies so I picked up the fly swatter and started swatting them. As soon as I did she headed under the bunk to hide out.  I started thinking about it and when she started her disappearing act yesterday bees were real bad around here and kept coming in the cabin. I was swatting at them when she left the cabin and disappeared. Evidently in her young life someone used a fly swatter on her (A LOT!) This is NOT a good thing because of all the flies, bees and other bugs around here. I guess I'm going to have to start putting her out while I'm doing my swatting. Either that or shut the door where she can't take off and try to get it across to her that I'm not going to use the swatter on her. It took a lot of coxing to get her out from under the bunk this time, but she seems ok after a lot of petting.

BTW yesterday she must have gotten too close to a birds nest because a saw a bird keep dive bombing her. She stays in the cabin with me now unless I'm out side. I guess she don't like being pecked on the head. ;) When I'm out she's usually trailing along with me. 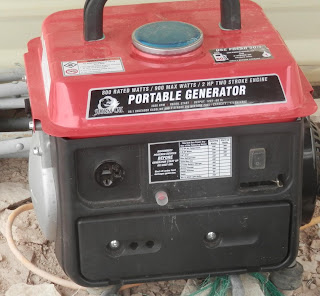 When Ring came down to bring Shelah he also brought this little harbor freight generator. We got the gas powered charger running, but then it quit again and wouldn't start so we hoped this generator might help by running an electric battery charger off of it. There is no way a 10 amp battery charger will charge the large battery bank from inverter cut out to full charge within a week, but it will keep them up when they are charged which will allow me to start running the fridge again. It won't run the fridge by its self, but it would through the battery bank and inverter. Problem at first was that the generator was out of adjustment and wasn't even good for that, but with some adjusting I now have it where it will. Its supposed to run for 5 hours at half load on a gallon of gas and the total load running the charger should be at or more than less half load so that should be fairly economical on cloudy days. I had to stop using the fridge again because of all the dark cloudy days.

Hopefully the generator will turn out to be a good one. Nick (now known as  Terlingua Bassnik because he now plays a bass fiddle) gave me one like it a few years back and in the heat here it only lasted about 8 hours before it potted out.

Anyway I'll probably only run it some late in the afternoon/ evening on real cloudy days and at night some so maybe that will help. It should also let me run the AC at night as well as the fridge when I get it all setup right.