Saturday RN & RV brought me 4 new batteries because one or more of the last four of the old ones that were still standing started going south. I decided that since I had new batteries and still had the lumber from the inside of the Dungeon I'd use the lumber to build a new battery hut. It was supposed to make 75 degrees today and it has as of right now. 75.5 degrees. I was determined to try and get the new hut finished today including blueboard insulation on the inside and OSB board on the outside. I'm afraid that didn't work out to well because around 11:00 I started to feel crappy and that seems to have been getting a little worse since then. Never the less I was determined to at least get the outside finished or get it weather proof one. The later was about all I could handle before giving up. I spent more time sitting in a chair resting than I did working. I still need to go out and round up the tools, but I'm going to have to force myself to do that because of feeling so crappy. It will get done though. 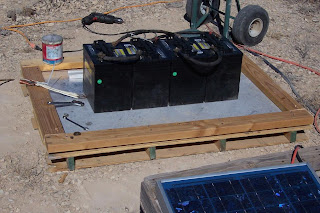 Above notice this is making use of another pallet. I picked a good one with no damage for this. On top of that I put 1/2 inch OSB thermal board with the thermal barrier up and then framed around it with 2x4s. Not much chance this will be going anywhere even in high wind with all the weight of the batteries in the center. 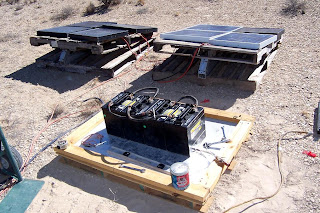 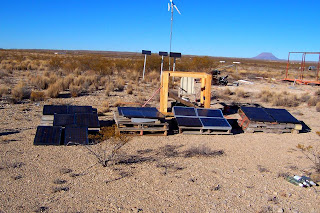 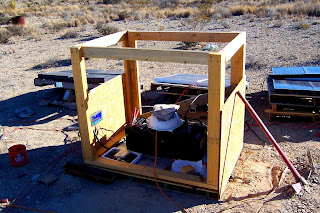 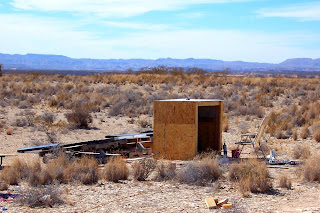 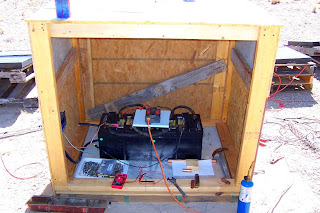 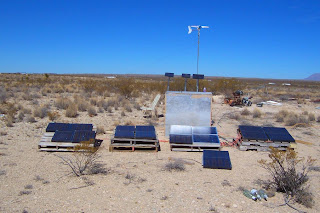 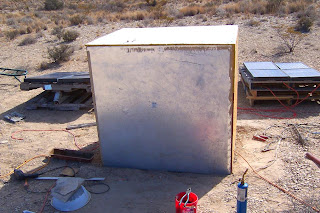 Not really much more than a big box, but it should work well for what it is to be used for. I plan to follow Frann's lead and stucco the outside of it. Will also build a door in the front when I feel better and add an exhaust system for the summer later on. I don't think the area is enough to worry about using it for rain catchment.

All of the panels in the picture are now connected through the charge controller so I should have plenty of juice hopefully even on cloudy days. The inverter and charge controller are also protected from the elements now so no more mixing bowl over the inverter. I still have three panels on the old battery bank and 4 on this trailer + two extra for a movable battery charger so since I'm not running the propane fridge in here anymore and am only using the LED lighting (Got two more) two or three will be more than enough to keep the trailer battery up. I'll take one or two of the panels for the trailer and add them to the old bank once I isolate the other bad battery and start using the little electric Coleman ice chest I got from RN for a fridge. I'll run it off of the old bank and those solar panels and it should do a good job (at least most of the year)

BTW we went to Alpine Saturday for me to get the propane tanks filled. I had two 5 gallon and a 7 gallon one. Turns out that they stop filling them at noon on Saturday and we didn't get there until 12:30 so I was out of luck there. We did go to ALCO and I exchanged the two 5 gallon tanks so I have heat anyway.