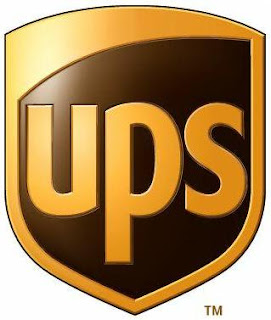 Being how I've been in RANT mode lately here's one more fer ya. Ever had packages shipped by UPS just to receive them mangled, Much later than they were supposed to be delivered or never arrive at all?

While Julianne was here the weekend after the lawsuit she ordered several things for her, Dave, Dave's sister and myself and they were supposed to be shipped to the legion. Reason being to save on shipping cost and the products ordered were much cheaper than they could be bought for down here. (Less than half the cost)

Now this was for your normal ground delivery and should have arrived within a week, but due to the bad weather we had back then it had made it from the northern state it was coming from to Oklahoma and then was returned to the state it had been shipped from supposedly because of the bad weather. Ok... Next thing the tracking says it had made it back to Oklahoma and then Mesquite, Texas (which is bordering Dallas on the east and north east sides.) FINE! Next step is that the shipping info gets updated saying it had left Mesquite and would be delivered here by the end of the day Tuesday, but it never arrived. Next morning shipping info was changed to that it had arrived in Odessa which is about 370 miles west of Mesquite and 220 miles north of the legion here. At that time the shipping info said it would be delivered down here from Odessa by the end of the day yesterday. GREAT! It never arrived! This morning the shipping info had been updated as the picture below. It had been shipped back the 370 miles east to Mesquite supposedly because of adverse weather conditions??? HEY! What gives here? There are no adverse weather conditions between Odessa and here, but there are back toward the DFW area! I surely hope it won't go back to Oklahoma and then the northern state it came from before starting all over again!
Now I ask you. Is it United Parcel Service or is it United Parcel Sucks?

I will say that the UPS drivers down here are GREAT and go out of their way to deliver as best they can and do it as quickly as they can. They also have to deliver in conditions most other UPS drivers don't have to contend with. (MUCH Worse conditions) Problem here is getting the packages to them so they can do their jobs. 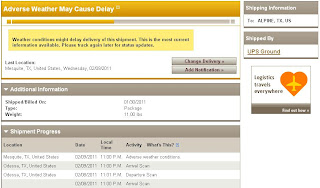 WOW! UPS must have gotten some Rocket powered Trucks! 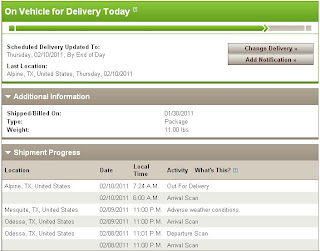