With gas prices going as high as they are and problems off and on with the falcon I decided it was about time to resurrect the trike. I figured it would be a lot harder than it was because it hasn't even been started in months since Dale and Dwight were here the last time. One small motorcycle battery was never enough to start it so a couple of years ago I added a second small motorcycle battery to help out because there wasn't room for a larger battery within the frame area. Now motorcycle batteries are real bad about not lasting too long and both of the old ones were dead. They are also not good at being revived with the Epsom salt solution like I used on the golf cart batteries for my off grid needs. I had a car battery that I haven't doctored yet and it wouldn't start a car during cold weather so I decided to use it on the trike because it will start it fine. I lost my storage rack in the process though so will have to come up with some other place to haul cargo. I may build another small trailer to tow behind the trike? As with the falcon this desert is really taking its toll  with the trike even with it never being ridden. BTW... John Wells calls it a Mad Max styled trike. What do you think??? 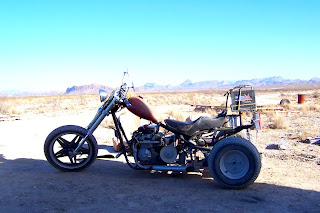 Actually getting it started wasn't hard at all once I put the car battery on the luggage rack and wired it up. Matter of fact with a little choke it started right up. I had to add brake fluid and purge the brake lines to get the brakes working, but since I could reach the bleaders and brake peddle at the same time that wasn't a problem. I assumed that the road in front of here would be near impossible to ride it on in the deep powder areas and also figured that IF I could get through those areas I'd be covered in the powder, but after a couple of trial runs that wasn't the case. Looks like we will become an item again. ;) BTW the trike gets 40 MPG (City) and I've never checked it on the highway, but it will sure beat the 17 MPG (at best) that the falcon gets for highway.

The below pictures were taken of last evening's sunset. 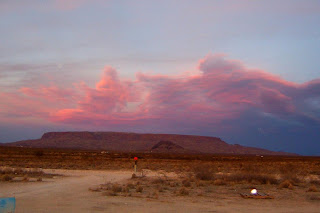 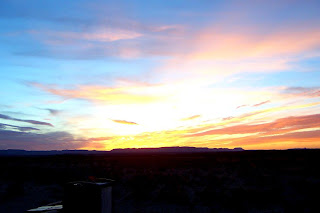 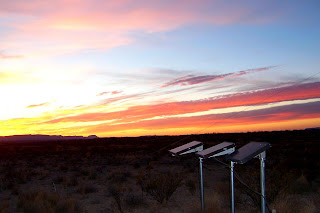