AUSTIN, Texas — A handwritten document proclaiming Texas was freeing itself from rule by Mexico is 175 years old.

Wednesday was Texas Independence Day. It was March 2, 1836, when historians believe the original and five copies of the declaration were made and signed.

Only the original remains. The pages are on a now rare public display into April at the Texas Archives and Library in Austin. 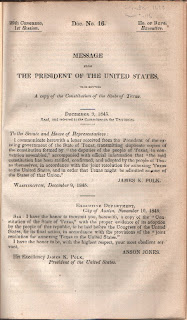 Just thought some who didn't know should know. Especially the ones living in Texas or planning to move here.
Posted by tffnguy at 8:27 AM