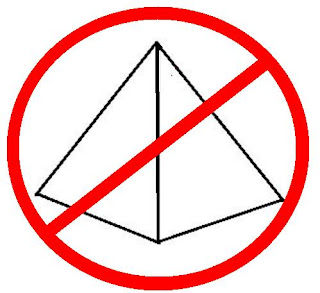 I learned about the loss of the use of the truck from Nick when I saw him at the hardware store this morning. Also took a gander at a rattler he killed last night and threw in the back of his PU. He asked about working with the skin and that was an easy one. You skin the snake and place the skin in Antifreeze for about a week and it is cured and ready for use.

Here is how I had intended for the pyramid deal to work. 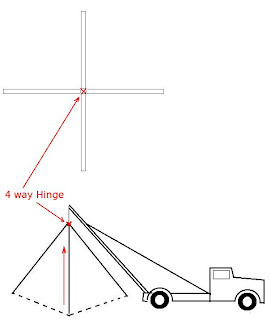 Bigfoot's son is or was planning to cut out some brackets I designed to make a 4 way hinge out of and it would have let me lay out 4 of the road rails flat on the ground and then lift them in to a pyramid using the winch truck. My plan was to pour 4 concrete pads with anchor bolts in them to bolt the base of the pyramid bottom to once the rails were lifted in to place. From there I planned to use some of the other rails as cross braces. I'm not beat yet though I'll just have to come up with another game plan. I have plans for a smaller pyramid in mind for now. Just a matter of getting around to starting on it.

Current conditions now is 95 degrees and windy as hell! That was after a chilly mid 50s for this morning.
Posted by tffnguy at 2:45 PM