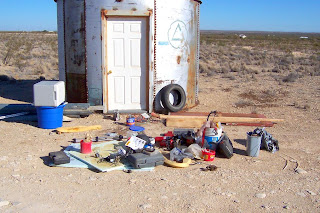 I finally got around to emptying out a lot of the contents of the tank looking for the heater and moving other stuff around where I can get to it when I need it without having to empty it again. Unfortunately all of the stuff you see in front of it needs to go back in it and that's where the problem comes in. I put it back in there as is and it will have to be stacked back on top of the stuff I just arranged where I can get to it. I SURE NEED to build some shelves in there, but that will have to come later. I just happened to look at one of the tires under this trailer as I was coming back in this morning and saw the large walking stick on it. I bet it was cold because it was 38 degrees according to the thermometer in the It'll Du earlier. Don't know how these guys handle freezing weather, but if they don't it's time may be nearing the end.

Cold, Pain? Yep... with the cold weather comes all the damn joint pain and my right knee has gotten to be the worst of all. Last night it got so bad that it was almost impossible for me to get up and down. Just bending that knee a little too much caused agonizing pain so I didn't move around anymore than I had to. Getting up and down the steps of this trailer isn't much better than just getting up and sitting down. Looks like I may have to build a ramp to be able to get in and out of here. I'm actually thinking about building a splint to wear when its giving me trouble so I can't bend that knee at all. That won't help being able to get up and down much, but at leas it should help the pain or at least cut down on it. I'm sure I'm going to have to live with the pain though because surgery isn't in my future. BTW... the heater felt mighty good several times last night and early this morning to. 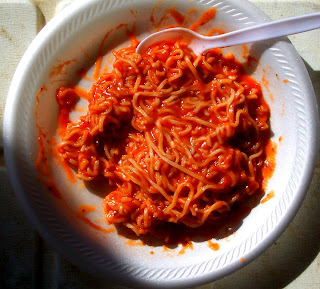 Here you have another one of my makeshift dishes. I guess you could call it spaghetti? Anyway I'd used the flavor packet out of a pack of shrimp Top Ramen noodles for a rice dish I concocted a few days ago and didn't want to trash the noodles. I've made spaghetti like this before, but used the flavor packet though. This time I used half the water called for. (About 1 cup to boil the noodles in. Added garlic power to the water as well as Italian seasoning, salt, pepper and some ground Oregano. I boiled the water with the seasonings first and then added the noodles. After that I placed the noodles in the water and boiled them for 7 minutes and there was still a little too much water so I added about a table spoon of 5 minute rise to absorb the rest of the water. Then I added the last 2 table spoons of butter I had and an 8 Oz can of tomato paste and simmered it for a few minutes. It was actually about as good as any meatless spaghetti as I've had. Didn't have any meat this time, but the next time I get the hankering for spaghetti I'll make sure I do. This makes a real fast batch of spaghetti and could have probably fed two, but I pigged out on it myself. I'd suspect using 2 or more packs of the noodles and maybe some diced tomatoes with a little meat of some kind (Diced Spam should be real good) and it would probably make a good meal for several. (Especially with some garlic toast and shake cheese)
Posted by tffnguy at 12:07 PM