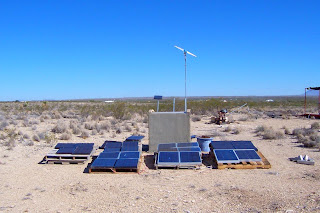 Started sorting out all of the newer panels I have connected now. I'm still using pallets and they work so well that's what I'll always use for them more then likely. There are way too many panels to try and set them up on some kind of solar tracking, but for now not even cloudy days are a real problem. Maybe a weeks worth would be though. If worse comes to worse I can go out a couple of times a day and prop the pallets up in different directions to get the most out of them, but I haven't had to do that since I started adding the extra panels.

After I first started adding some of the newer panels I wired them directly to the battery bank and left the others to run through the Harbor Freight charge controller. Didn't take long to figure out that wouldn't work, because I woke to the inverter squawking a couple of mornings. I wasn't out of power yet either morning and fortunately the sun started giving me more power before the inverter had a chance to cut out. After that I bypassed the controller and wired all panels directly to the battery bank and used ME as a controller by keeping tabs on the voltage and disconnecting some of the panels when the voltage got to high. That turned out to be a hassle so I got to thinking. (Believe it or not) It finally dawned on me that the controller wasn't working because it was getting a false reading from the panels going directly to the battery bank and kept shutting off the other panels. Yesterday I moved the other panels off the ground and added three more pallets on the south side of the battery hut for them. I rewired all of the ones that were going straight to the battery bank in to the controller like they should be and all seems to be doing well. I still have another 10 panels to add to that bank so will have to add several more pallets before I add them. I've actually got two battery banks now, but the other one is two of the older batteries with about 200 Watts of panels running to them for this trailer. 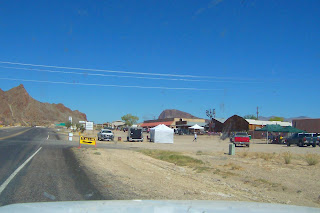 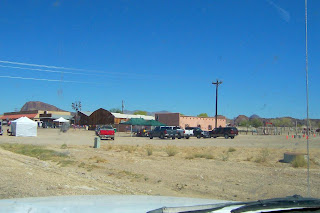 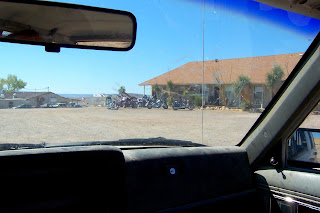 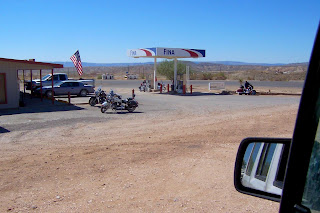 There's the Ride for Trails bike Rally going on at the BBMI this weekend. I took the camera when I went in earlier this afternoon for supplies and thought there would be a lot of bikes there to take picture off. Turns out that most were out on a Poker Run of something like that and there just weren't many bikes there. I was invited to go to the feet at BBMI by my neighbor about 6:00 and tole him ok, but the more I thought about it I decided agsainst that and stopped by his place on the way back to tell him not to stop to pick me up. I guess I'm going in to another one of my antisocial moods? BTW I hear that every single room at BBMI is booked and looks like most of the RV park is taken up to. Haven't seen it this full in a long time. Of course it will probably be the same way for the chili cook off though. 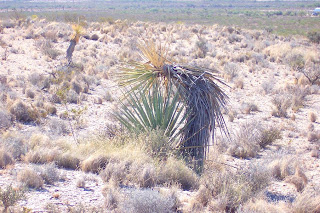 I'm seeing a lot of this where between the lack of rain until it was too late and high wind a lot of the Yuccas are going south and blowing over. There have been no blooms at all around here yet and I'm sure there won't be this year either. Dang! There goes some good desert food that I won't be getting this year!

Moonrise over 9 Points last night.
Posted by tffnguy at 2:53 PM