Local News and Such

Thought I'd show off the birthday cake my sister made for my brother in law (Ring) and I. 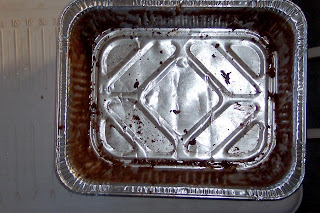 Well it was a cake and a VERY delicious one. (Chocolate cinnamon), but I just polished off the last of it earlier this afternoon. My birthday is today and Ring's was a couple of days ago so he came down and we celebrated together. BTW  I'm 39 today. You believe that don't you? ;) 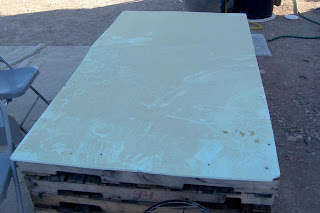 This is the old party table I put together just before the last party. I need to get the blueboard (Foam) taken off and put back in the tank because the sun is eating it up. Once I do that I'll eventually have enough of the spools shown below to take the place of the old party table and be able to use all those pallets for something more constructive. I think three of the spools should do it so hopefully Ring can bring two more on his next visit. And now for the local news. Since this is my birthday and I needed a couple of things from the store I went in to SB this morning and was going to treat myself to breakfast. My neighbor Robert rode in with me and once we'd finished breakfast Lanette informed me that she picked up the tab. Not only that, but she took a chocolate cup cake and put a single candle in the center and sat it in front of me. Then her and Kim the waitress began to sing happy birthday and a couple of other people in the restaurant joined in and clapped once they were through. Nick showed up after that and wished me a happy birthday and also had good news. You can read about it below.

In other news GOOD NEWS for some of the Terlingua Ranch land owners.
Quote Nick "well to be a little more acurate: I said the attorney for the ranch told the ranch that they are not able to bar anyone from running or voting because they havent paid their dues. Its based off of a law suit in another area . but applies to us.


Basically the same thing. so if any of you who are not paying your dues which are legally assessed to you, want to run for the board or vote then its very good news for you." End Quote

I suspect this will cause a BUNCH of changes with the ranch. I hope so anyway. The Mahan brothers stopped by for a visit last week and Don said he is running for the board again and I told him I couldn't vote because I'm behind on the fees. The new ruling changes that and he'll get my vote now. Hopefully you other land owners will do the same. IF you don't get a ballot in the mail for the next election then you might want to contact the ranch office and ask to be sent one. I'll try to find out when that will be and post on this blog.
Update... According to Lance if you haven't received a ballot by Dec 20th you should call them.


Also more GOOD NEWS. Just Me found out that you can shop online at Walmart and if you order $45 or more worth then they send them to you free of shipping. This could be a very good thing for us down here. Bad part is they use FedEx and the FedEx drivers down here don't give a flip and don't even try to find most of the places out on the ranch. Might be that IF you can catch the driver and tell them how to get to your place they will try it, but I wouldn't bet on it. I think that's been tried a lot of times and seldom works. Anyway I may start using it and have it sent to the Legion until I can see if they can find this place.

Grub Shack news
Ring and I ate at the Grub Shack Sunday afternoon and I talked to Jerry. He said that would be the last day of the meals for donations. He said construction will  begin soon on getting the septic system in and then he hopes they will be able to resume normal operation on the first or second weekend of December. Sure will be nice to have a place to eat out this way again! BTW they had some dynamite home made chili, Frito's, cheese and other stuff to go with it and served home made chocolate ice cream for desert. Good thing because the chili was pretty spicy (Hot).

Burn Ban Update Thanks to RV Rover
http://alpinedailyplanet.typepad.com/alpine-daily-planet/2011/11/burn-ban-modified-to-allow-some-outdoor-cooking.html
Posted by tffnguy at 5:42 PM