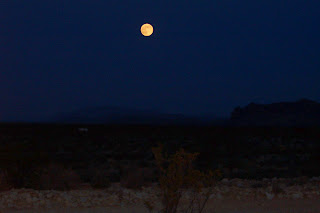 Haven't gotten anything useful done around here in what seems like forever. Too damn hot during the day and even though I have the will to work on the cabin I still don't feel like it. Feeling semi fair and feeling lousy seems to be a seesaw now days.

Anyway I've been staying out in front of the cabin pretty late lately because it takes this trailer forever to cool down and its much cooler outside. Its still 96 degrees in here at 10:30. Will probably be midnight before it cools down enough to sleep and that will be in the high 80s. It got to 110 again today that I know of. May have gotten hotter. there wasn't much wind at all most of the time. Or at least it was out of the wrong direction to do me any good. As usual the damn gnats were really pesky.

Now while sitting out in front of the cabin late I've been sort of fooling around with this idea and that. Taking a few pictures and trying things that aren't hard to do. The above and below pictures were taken last night. 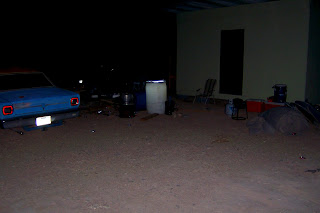 One of my friends code named Hollywood had dropped me off a couple of 55 gallon plastic water drums a while back (One blue and one white.) I'd also bought a many many LED light from Ron (the guy that sells the cabins) and it puts out one heck of a lot of light, but is actually too bright to look at and the bugs love it! I looked at the white drum and got to wondering what would happen if I turned that LED light upside down on it and what you see below is what happened. 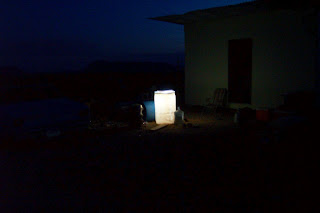 It actually looks pretty dark here, but it is much brighter all around the drum for a good distance and no glare and for some reason it doesn't seem to attract bugs. I think I've discovered my new party light! It sort of lights the area up with a warm glow. I actually got in the jeep and headed down 118 and it looks pretty cool and ghostly from a good distance. May decorate it up for Halloween? ;) 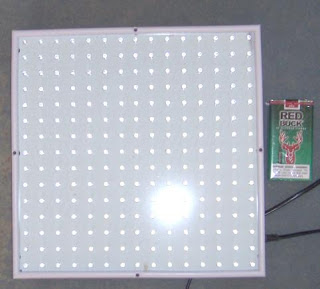 Added this picture after Bigfoot asked what the light looked like. Its 110 volts AC and only pulls 14 watts. It is one BRIGHT puppy!