Big, Little and Under Feets made it down yesterday evening, but it was this morning before Bigfoot came by. He was bearing gifts as usual and one was a new (to me) apartment sized fridge. This should open up a whole new world for me as far as food storage does. It has a large separate freezer compartment and decent sized fridge part to boot. It pulls less than 150 watts running which is about twice that of the small fridge, but I have plenty of solar to support it. 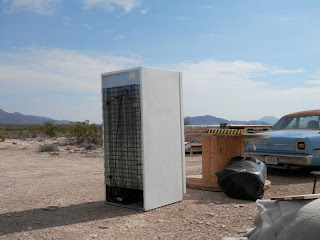 Ring dropped off the large spool a few days ago and that will make a good party table. I'm figuring I can put the white plastic drum I have in the center and on top of it with the solar light on it and have a well lighted area for the party area and a lighted place to eat for several people. (At night anyway)

Bigfoot also brought me this. I bet I'll have a lot of fun with it, but I brought it in here and loaded it and even though there had been a bunch of flies in here earlier they all seem to have vanished now. Evidently new technology news and warnings must travel fast in the fly community. If you wonder how it works you can watch the video below. 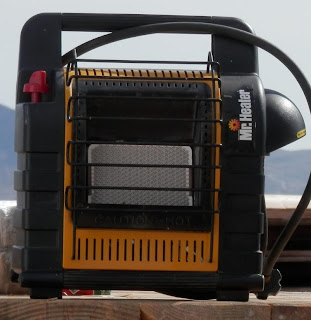 And last, but not least Bigfoot also dropped off this heater. Its a loaner, but hopefully I can get one like it before he needs it back. It should do great in the cabin once I finish insulating it.