My niece turned me on to a the little DVD player shown on top of my laptop, but the screen is so tiny (especially when the movies are wide screen) that it is hard for these old eyes to see. Of course reading glasses help, but still its pretty hard to see without getting close and also makes it real hard to get comfortable.) I had the 22 inch monitor that I brought down here from Plano, but using the desk top that goes with it is out of the question without running the generator. (500 watt power supply and then the overhead of the monitor on top of that.) Well I decided to see if I could use the monitor with the small DVD player and I could IF I had the right cable, but I don't. I searched around and found my USB DVD player and hooked it up to the laptop and I could watch movies like that, but the combination still drew more watts than I wanted it to so using it at night is out of the question. (unless its a windy night so the wind genny can handle the load) I'll see about getting the right cable to run the monitor off of the small portable DVD player and that will take care of that problem. The monitor was running off of the laptop in the picture below. 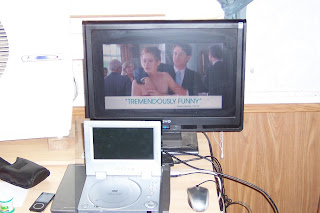 While taking more stuff out of here today and putting it in the dungeon to make room in here and straighten this place up I ran across the box fan below and for the grins of it I decided to check the watts it pulls. Turned out that it pulled more watts than the swamp cooler and doesn't cool the air while doing it. It actually doesn't put out anymore air either. Not a good thing for off grid living! 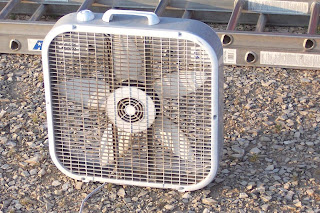 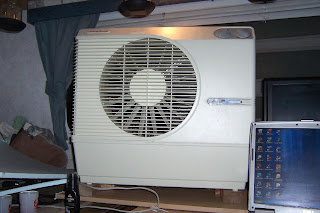 Now I've made swamp coolers before, but they were tiny as seen in earlier pictures of the dungeon. In reality it probably pulled near as many watts as the one above (mainly because of the pump used) and came no where close to putting out the volume of air or cooling near as good either. I'd say having one of the Convair Westwind swamp coolers is the only way to go. I won't be trying to make any other swamp coolers because they just can't measure up! Fortunately I didn't have to buy that one, but if you plan to spend a fortune on the stuff to build one that won't work near as good then why not buy one of those instead. The pump is actually run off of the fan motor via a small belt so no need for a pump motor. You can also regulate the amount of water to the pad by a dial on the front of the unit so you can pick the cool level you want and water savings along with it. It also has a turbine type blade which cuts down on the problem with wind coming in a window from the other direction. It can also be used outside for spot cooling. 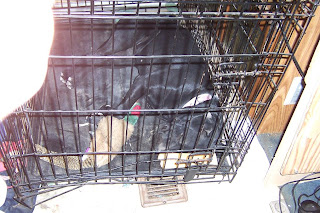 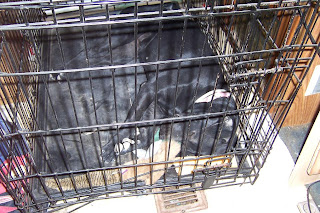 Pepper has steadily been picking at her bedding in the cage for a good while and has been swaked with a fly swatter several times because of it. However, last night she mangled it so I put her out of the cage, removed what was left of the bedding and all the stuffing she had shredded and pulled out of it and then put her back in. You could tell that she was really bummed about loosing the bedding. Mater of fact she had to be forcibly put in the cage this evening where before she always went right in. Oh well... the medium sized dummy shouldn't have ripped it up! Now she seems to be paying some attention to one of the toys Abby sent her. Guess I should have removed the bedding a long time ago.
Posted by tffnguy at 10:12 PM