Night before last turned out to be a REALLY Lousy night. I'm guesstimating that the wind was gusting around 50 MPH when the cold front blew in. The temp dropped to below freezing over night and that wind was plenty cold coming in through the cracks around the door. Worst part was that the wind had to be out of the east northeast because it was coming in here plenty fast. Almost felt like a fan blowing. 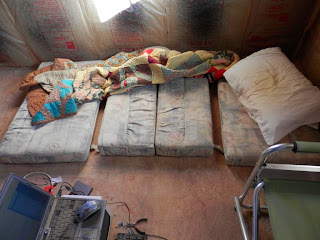 I'd robbed the cushions from the dining room bunk in the trailer to make a quick temporary bed out of and the bottom was vinyl which made it slide around on the OSB board floor like it was made out of ice. To make a long story short I had all of the cushions together when I went to bed, but as I turned it caused the cushions to separate and slide apart. That let the cold air use the space between the cushions as a way in under the cover. The little heater just couldn't overcome the cold air coming around the door. I finally got up and put duct tape over the cracks around the door and that seemed to help so I hit the rack again. Later I started getting very cold again and found later that the wind had blown the duct tape off. 40 degrees was the coldest I saw in here that night. I'd seen 23 or lower in the Dungeon so I guess this was still a big improvement. 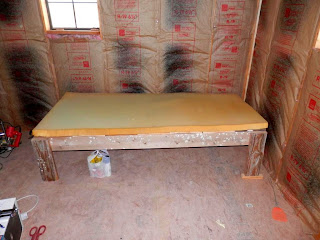 Determined not to have the same type night I managed to find enough stuff around here to temporarily weatherstrip the door and I got in high gear yesterday evening and got a temporary bunk built. I had more than enough lumber for that that had gone south after  I broke my arm and couldn't use it in time to keep that from happening. 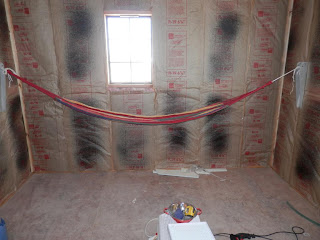 This hammock was what I had intended to use to start with, but once I had it up and tried it I decided there was NO WAY I could get a decent night's sleep on that so it came down a lot quicker than it was put up.

Last night turned out  to be a very good night. Perhaps one of the best I've had in cold weather since I've been living here. There wasn't any wind so I couldn't tell how well the weather stripping would have done. The little heater did a great job on low until  about 6:00 AM when the temp had gotten to 55 degrees so I switched it to high and got up when the temp  got up to about 68 degrees fairly quickly. It was 35 degrees in the trailer when I went to check that and I'm sure it got below freezing again because the ice chest I had outside with ice and water in it was crusted over with ice.

And here are a few pictures I've taken lately with the new camera. 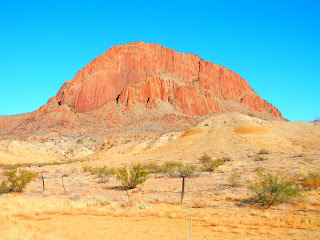 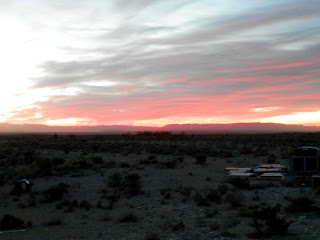 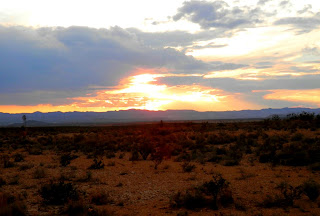 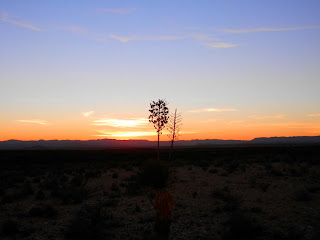