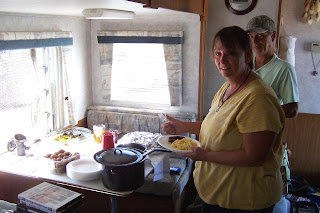 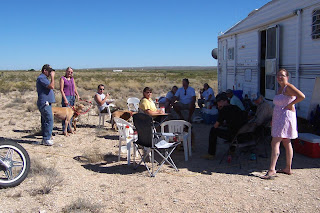 I think everyone had a good time and there was plenty of grub to go around. A few of  us headed for the legion around noon and then several more showed back up that evening for a party on the other side of the trailer where we once again had shade. Had another guest show up as well (Lee) for that party. Julianne brought the groceries in from Midland when she came down and did most of the cooking other than the eggs. Frann brought some cooked Chilies and warned that they were HOT! She was right, but they were good.  I think Misty helped some and did most of the roundup of trash and dishes after the feed. I cooked the eggs (two 10 inch skillet fulls). We'll have to do this again some times!

Bigfoot dropped me off a solar shower bag so that gives me another option for showers. However, the last shower wasn't too bad coming directly from the water tank. I may try connecting the solar shower to the input line to get the water temp back up to a comfortable level again. When the weather cools off more that will probably be a must.
Posted by tffnguy at 8:53 PM