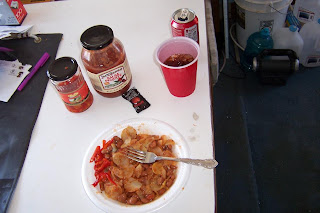 Or... Pretty Darned Good Food.
Had a hankering for some fried potatoes and beans, but didn't have any fresh potatoes so... I opened a box of Scalloped Potato mix and used the dehydrated potatoes out of it. I'll put back the sauce mix for something else later on. I boiled the dehydrated potatoes and some dehydrated onion flakes for 15 minutes to rehydrate them and then drained them. Heated up the skillet with olive oil and fried the rehydrated potatoes with salt, pepper and a few other seasonings. Warmed up a pan of beans to go with it, but discovered I was out of catchup so searched and found the catchup packets. Also used some of the Salsa Picante  Bigfoot left me when they were here for the brunch. Turned out to be a good filling meal with more left over for supper. Of course there will probably be a gas factor with that meal. ;)

BTW I have used canned diced potatoes the same way with good results, but didn't have any of those either.


Yeah I still miss Pepper, but not quiet as bad.
Posted by tffnguy at 4:04 PM