SCUMBAG! / Banks / Made in America?

Just received word that my second cousin has cancer and it is terminal. They are giving her 3 to 6 months to live. Now after learning that she has cancer her  husband of about 10 years has left her and plans to file for divorce. Never did like that guy, but what I think about him now is not suitable for posting on here.

And on another note my bank (other than the one down here) has failed to send me my new check card. I'd suspect it went to Plano rather than where it is supposed to have. (down here) Problem is that there are a few low life's living where it would have been sent if they sent it to Plano. I really hate banks! Of course it would be hard to do without them though. In this case my land payment and a couple of other bills are tied to that card and since it will expire tomorrow no telling what the heck will happen! I can't contact the bank until I can get in to SB to call on my cell phone so I'm screwed there. I also only have one check left for my old bank so will have to use it to transfer my $ to the bank down here and figure out what to do again before next month.

It looks like I'm going to have to chance taking the falcon to SB Friday since RN won't be here until next Sunday with the new tires and I have GOT to be in SB Friday to take care of the banking and do a few other things. (Like find out why no new check card!)

Oh! and one more rant! Used to be Made in America meant quality, but evidently that isn't the case now. At least for the particular jug shown below. That was my shower jug, but now I'll have to come up with something else for that. Either that or pipe from the water tank to the shower pump which will mean some pretty cool showers because the water in the tank just doesn't get hot. I could use one of the 55 gallon water drums Buddy Crawford gave me, but they are both full of water and I don't think I'm tough enough to move one of them over to the shower. They are in the partial shade of the dungeon now as is so they wouldn't get warm enough for showers either. 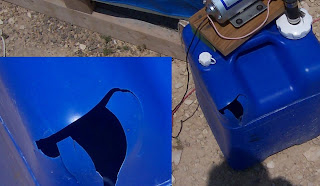 For once I can't blame this on Pepper, just shoddy merchandise. It hasn't been over 5 months since I bought this and its been used for the shower considerably less time than that and had been kept inside out of the sun before that. Looks like it is just disintegrating.