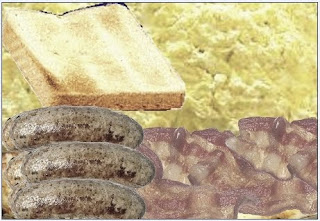 It appears that someone posting on Frann's blog was feeling left out about not being invited to the Brunch Sunday. Now since they posted as Anonymous I'd say that isn't anyway to get added to the guest list! Needless to say this isn't Denny's though and resources and food will be limited so it isn't likely more people will be added to the list unless they are from this immediate area and follow my blog. Just not room or food to put on anything bigger and for more people.

How this all got started is that Bigfoot and Littlefoot generally invite me over for brunch when they are down here. I told Just Me that I'd like to invite them over for brunch for a change and she said she would like to come also. She also said she would pick up the groceries in Midland before coming down here. James the surveyor has been there to so when I contacted Bigfoot about it and got the OK then I told him he could invite James to. Now that made 5 people, but knowing that Frann had just moved down here and Abby would be here the morning of the brunch I invited them. Add 4 more because both Frann and Abby have friends with them. That made it 9 people.

My brother in law RN will be down here to bring tires for the falcon and is bringing a co worker along so add 2 more making that 11. My neighbor expressed interest in coming so at first that would have been him, his wife and daughter, but the wife and daughter will have to work so scratch those two making the total now at 12. More than likely we may go to the Legion at some point and the bar manager Dave will be off so I also invited him making a total of 13 invited.

Who knows... If this is ever done again maybe it will be a pot luck where each person brings something +their own chairs, drinks and so on and then more people could show. I'm not looking for that to happen though.
Posted by tffnguy at 2:23 PM