Bummer about the Starlight Theatre closing. I seldome go there or eat there, but I sure hate to see it close. It is an ICON for this area to be sure. Who knows... Maybe the Terlingua Ghost Town is really going to become a ghost town? I heard it through the grapevine that the radio station has already shut down. Actually found out about the Starlight closing through DD's Blog because I hadn't checked John's yet. Supposedly Saturday is the last day. (Both blogs are listed to the right on this blog.)

Not much else to write about from here other than I'm still battling computers, but out of two defuncted computers I now have one that will play DVDs, but only during the day or on windy nights. (Unless I want to take a chance on being out of power during the night some time. Ah Heck! I'll try it the next calm night and see how it goes. I may have to run the charger the next morning for the first time in I don't know when. 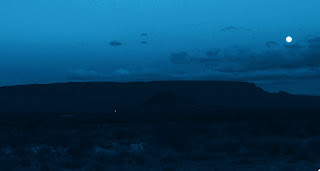