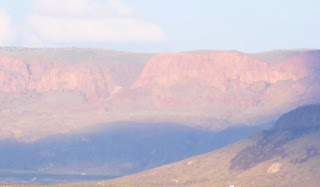 Ok... here's the deal. Evening before last I heard the sound of Pepper jumping from the trunk or hood of the falcon to the roof. Not sure which because when I looked out she was standing on the roof. The trunk and hood both have dusty Pepper paw prints all over them.

I went out with the leash and whipped her with it and she didn't move a muscle so I picked up a hand full of sand and gravel and threw it at her which she hates and usually runs. Took a couple of times of dong that before she did though. She was in one of her stubborn moods.

When she did run she got behind some bushes far enough away to be out of throwing range and kept popping her head up looking back at me. I was determined to make enough of an impact on her to make her decide that getting on the falcon shouldn't be done so I went in and got the 380 and started to shoot around where she was. She took off north toward the legion and I didn't see her for a while until Dave at the legion brought her back down here. I think I'll write him off as an X-Friend!

Anyway she did go to the legion and Dave's nieces opened the door and she ran in. Took them a while to get her out because she was in one of her STUBBORN moods

Now you would think after going through all the trauma of what had happened she would have wised up and figured out that being on the falcon could be hazardous to her health, but guess where she was again yesterday morning. If you guessed on the roof of the falcon you would be right. More throwing dirt and gravel (without the shooting) put her on the run again, but not far away.

I guess something good came out of this because Dave's sister said she would take Pepper in and the three girls like her so with them and four other dogs maybe she will have a good home. I'll probably take her over there today. I guess if I ever get the hankering to see her again (NOT LIKELY) I can go over there to visit her.

About the too pooped to post part that will be the next thread.
Posted by tffnguy at 7:12 PM