Spareless again / but not without Coffee! / Purse Snatcher

If anyone ever offers to sell you like new tires and says they were only used for two weeks, but were a year old just SHOOT them! 3rd of 4 tires that were supposedly almost new. 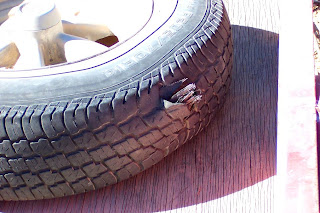 I did manage to limp in to Study Butte and the Study Butte Store before having to change the tire. I drove the last three miles at about 20 MPH. I had the trailer with me because I needed to get 3 propane cylinders filled and a jug of gas and there wasn't any way to get all of that in the falcon. I jacked the car up as usual by putting the jack cradle under one of the U bolts on the rear axle to keep it from sliding off. This time that was not a good thing because the spare is lower profile that the other tire and once I got the spare on the car settled so low that I couldn't pull the jack out. I started looking around for a flat rock that I could jack the car back up and put under the tire to allow me to get the jack out, but unlike here where there are thousands there was NONE! I rummaged through the trunk to find a chunk of iron thick enough to do that with and then when I got the jack out I just drove off of the iron. I got the cylinders filled while I was doing that but after going through all of that I forgot to get some of the stuff on my list. (See below) 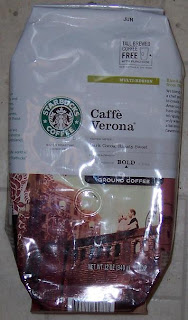 One of the things I forgot was coffee. Just so happens that I stopped at the mailbox on the way back and what do I find? Coffee. :) Yep... One of my site members and a follower of this blog Dennis Walker had sent me another bag of coffee. Thanks Dennis!

Some not so good news was that I got an email from Bigfoot saying that while Littlefoot was at Walmart some jerk ran up to her cart as she was loading the groceries in the car and snatched her purse. Without thinking of the potential danger she tried to catch him. According to Bigfoot the guy hit her with the rear bumper backing out and then again with the front bumper as he sped away. Fortunately it doesn't sound like she was seriously injured. I suppose one of them will update her blog and give more details later. (Which is why this didn't get top billing) They were supposed to arrive down here today, but now it will be tomorrow.
Posted by tffnguy at 4:38 PM