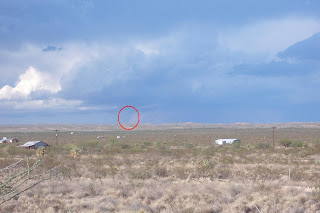 First off evening before last I was sitting out in the shade of the trailer and noticed a well defined classic funnel cloud emerging from the clouds to the northeast where there were storms going on. I watched it for a few minutes and it looked like it probably touched down, but I couldn't be sure because of the ridge between here and there. At that point I headed in here to fetch the camera and by the time I found it and got back out it looked like the funnel was breaking up and going back up in the cloud. You can see the remnants of it in the picture with it circled with the red oval. I'm not sure something like this didn't happen around here the night of the big storm because on the south end of the trailer there was stuff that was easily light enough that it should have been in the next county, but on the north end of the trailer it reeked havoc. 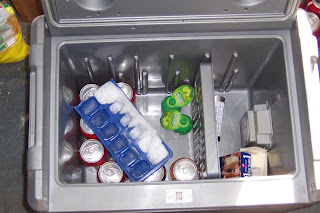 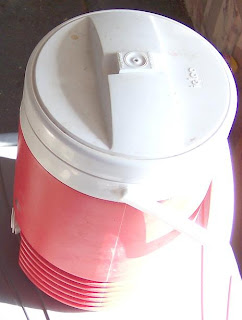 My neighbor came up with another electronic fridge that actually works GOOD so it looks like I'll buy it from him. Matter of fact it works so good that I may have to add a refrigerator thermostat to it to keep it from freezing stuff at night. at 7:00 this morning it was down to 27 degrees inside it and when I took the picture  of the thermometer it was 80 degrees in here and still down to about 32 degrees in the fridge. Yesterday when it was 90 degrees in here it was still at 38 degrees which is more than cool enough to store perishables in. Not a heck of a lot of room in there, but I can live with that. The water jug in the bottom picture will just fit inside it with the lid removed which means I can store a whole bag of ice in it and that should last for days instead of the one day it usually lasts in a normal ice chest.

BTW the outdoor fridge ran out of propane last night and I've now decommissioned it. No more sucking propane for it. Now not only should I be saving $ on ice I'll be saving it on propane to.
Posted by tffnguy at 10:53 AM